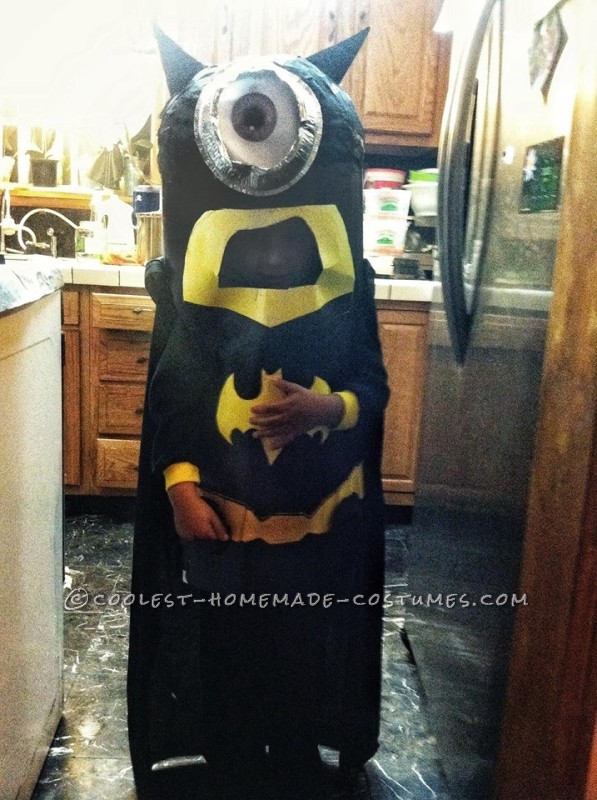 My son wanted to be a minion for Halloween. We went to go look at costumes and they were just really bad so I figured he would look better if i just threw on some yellow pjs an overalls and not to mention so much CHEAPER!! So I started browsing the internet for some ideas and I stumbled upon a cartoon picture of batman minion and my son loved the idea of it. Here is how I made the best batman minion costume ever, and you can get most of the material at the dollar store.

Body: For the body i just bought two poster boards the flimsy paper ones(@dollar store) and rolled both of them together to get a cylinder shape and stapled them together. Just make sure to actually get into it to make sure you are going to fit in it.

Head:Since the top of the minions head is round, I got a bowl and just did a paper mache mold out of the bowl. Once dry cut two slits at the top of the mold. Cut out two long triangles out of cardboard and stick them into the slits (these are Batman’s ears). Tape the mold to one end of the cylinder posterboard.

Now all you have to do is start painting your minion costume. I bought some black and yellow paint, some black electric tape, Velcro stickers, and a pie pan(all purchased at the dollar store). I painted the  yellow things first  like the face and of course the batman logo on his body, then painted the rest of the minion black and wrapped it all in the black electric tape , including the face and ears. I then hand drew the mouth which is where you will see through so make sure it is big enough, and cut it out. Cut out 2 circles at the sides for the arms. Make sure you cut the holes big enough, if not you will be really uncomfortable. I had to re-cut the arm holes like 5 times until my son was comfortable in it. Now for the eye take the pie pan and cut out the bottom of it. I just printed out the eye of the minion and pasted it to the pie pan. With the black electric tape I wrapped the pie pan to the face. I then stapled two strings on the inside of the costume so that it could easily rest on top of my sons shoulders and he wouldn’t have to carry the costume around. This part can be a pain because it is really hard to staple the two strings on the inside of the costume, I had to do some serious thinking when I was putting on the strings.They kept coming undone, so i recommend making two small holes in the front and the back, pull the string through the holes and tie a knot at the end so that it doesn’t go through. I put two Velcro stickers to the back so that I could attach and detach the cape(I’m pretty sure you have a cape lying around somewhere in your house). As for batmans belt you can just paint it on, I used an old batman belt that my son had from a costume and used Velcro to attach it. Now throw on you black pjs underneath and black boots and BAM you are now deeedoodeedooo BATMAN MINION!

My sons costume was a hit, everyone loved it. I was being asked at every house where we had got it done and they loved the idea of two characters in one. They couldn’t keep their eyes off him, we even had kids following us just to get a better look at it. Just be aware that you will not be able to sit down with this costume. But who wants to sit when you’re in such an awesome costume