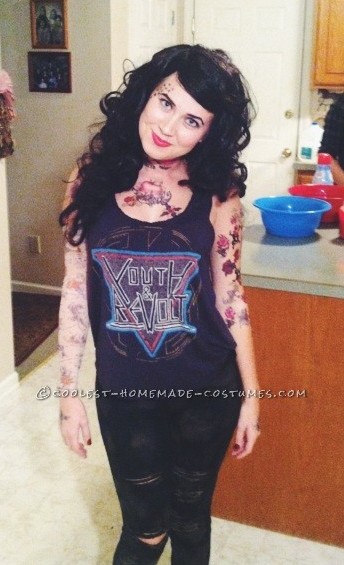 This year’s Halloween costume was so last minute but turned out better than I could have even imagined. I was trying to decide what to be for a friend’s Halloween party and decided I would be a Troll. While walking through the Halloween store I came across fake tattoo arm sleeves. I then thought, oh my gosh, I have GOT to be Kat Von D. This would be too funny and get the best reactions. One because I am the complete opposite of her; blonde hair, green eyes, small, girl and no tattoos. Two, being that I knew I could try to mimic her look so well that it would be scary.

So, I started my search for everything I needed. I bought a black curly wig, temporary tattoos and a tattoo arm sleeve and called it a day. After that, I channeled my inner badass, as much as I could and took on rocking a smokey eye with temporary tattoos ALL over. My friend was all about making a great “chest piece” full of tattoos. I had them all down my arms. My friend drew stars on my temple with a black eyeliner pencil. I wore red lipstick, way too much eyeliner and rocked the rebel tee, ripped jeans, booties and of course the notorious leather jacket. I felt like I could get away with anything in this outfit, I had a night to be a serious rock chick.

I walked into the party, and let me tell you, all jaws dropped and they were like “WHO IS THIS?”. The minute I opened my mouth they all came over laughing and walking around me in circles, checking out my new digs. Everyone wanted to take pictures with me because they couldn’t believe I could look so different. I went around asking people if they wanted me to do some nice artwork on their bodies (aka: using my temporary tattoos to work there magic). I tried practicing my best Kat Von D poses ( which I had such a stinking hard time with since I can NEVER keep a straight face) and to make it even better, we went to a Waffle House afterwards. I got all sorts of stares and giggles. 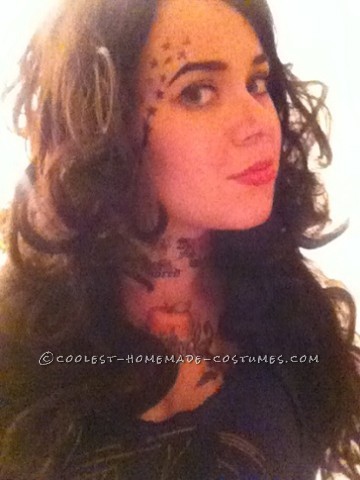