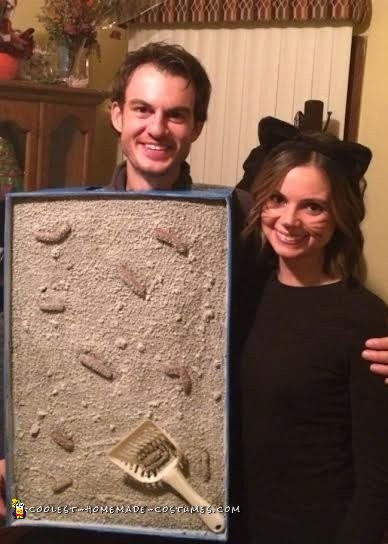 I am a natural cat lover and when I got married, my husband knew myself and my 2 cays came as a package deal. My husband, however, is not much of a cat person, but has learned to tolerate them. It has become a running joke among family and friends that I have turned his life into one large litter box — and that is where the idea came from for this years 2015 Halloween couple costume!

I started with a large box -cut out the appropriate holes. The entire front of the box was cut out and depressed, then taped in place. The inside of the box is lined with regular duct tape to support the structure and secure all cuts. The outside was then lined with blue duct tape to give it a more plastic appearance. Spray adhesive glue was then used to apply cat litter to the front aspect of the box, over and over again, layer after layer to cover the front.

Mini tootsie rolls were then heated for 15 seconds in the microwave and then moulded to resemble cat turds, which were then rolled in more kitty litter and glued to the box! A pooper scooped was secured by driling a couple of holes in the box and securing with twistie ties. I then spent days just randomly spraying more adhesive glue to ensure the litter was not going to flake off everywhere! I bought your typical cat costume ears and tail, dressed in all black, drew on the appropriate whiskers and nose, and ta-da!

Everyone at our halloween party got a pretty big kick out of it. Definitely oringal and hysterical. Some people were a bit grossed out thinking the poop was actually real! My husband is definitely a trooper for wearing it! He did not know what he was getting himself into when he told me it was my turn to pick this years Halloween costume!!! 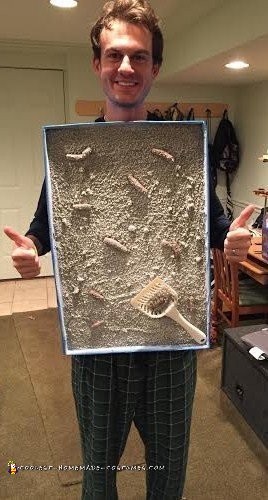 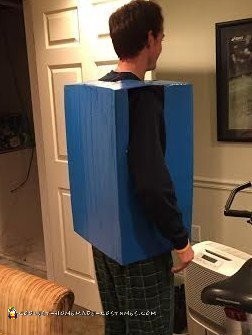