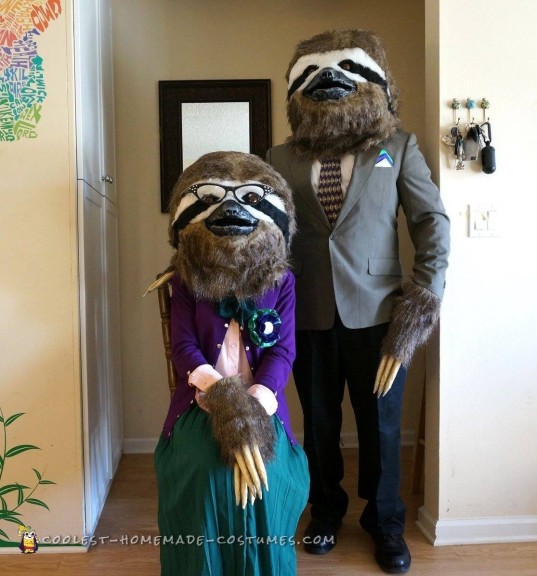 I absolutely love Halloween but after a few successful years I felt like I was out of ideas for this year. Then I spotted my husband’s funny t-shirt with a picture of a well-dressed sloth and the title “Dolla dolla bill y’all” and inspiration struck! I started to Google “sloth costume” and various sloth memes that are floating around the internet to see how I could work the idea into a Sloth couple costume. A picture popped up of a female sloth matching the same illustration style of the sloth on the t-shirt, perfect! We were going as a sloth couple costume!

Previous Halloweens I had made other “heads” so I knew the methods I would use for construction: Cardboard and duct tape for basic shape and then build it out with layers of newspaper, masking tape and paper mache.

It took me soooo long to get the first head looking right! Once I got that one nailed down the second one wasn’t too bad. The hardest thing was trying to keep the mouth at eye level so we could see out.

I bought all the fur at JoAnn’s and really got lucky with the brown fur, it was so perfect. A little more expensive than I had wanted to spend but it was just too good not to get!

The eyes are made from wooden balls I found at Michael’s, with a bead on top for the pupil. The noses were sculpted from Super Sculpey, a polymer clay you can bake in your oven. That stuff was a great find! I had never heard of it before but one of my coworkers is really into clay sculpting and he mentioned it to me one day. So perfect!

We found the outfits between Salvation Army & Goodwill and then I made a pussy-bow for the lady’s shirt, a fabric flower from a tutorial I found on Pinterest and a matching pocket-square for the man. I bought the cat-eye glasses on Amazon, they were originally red so I painted them and added the chain across the top to help define the outline against the dark fur. I also put fake eyelashes on the lady one to add a little more femininity.

Applying the fur was probably my favorite part of the process, they came to life so quickly after that. It was extremely messy though, our apartment had fluffy bits in every corner! I’m still finding it everywhere!

Originally I was going to call these “Mr. & Mrs. Sloth” but while I was working on them (and getting attached to them on those nights I stayed up way too late) I thought they needed real names to give them more personality. I felt the female looked like a “Babs” and my husband came up with “Archibald”. So Barbara and Archibald Sloth were born!

I put a lot of effort into Halloween every year but I never take very good photos of the finished product so this year I wanted to do a little photo shoot at home first. I’m so glad I did because once we went out it was dark and also very difficult to take my camera out with long sloth nails!

Our friends loved Babs and Archie and we got great reactions at all the bars we went to. We spent half the night posing for photos! The Sloth couple costume was great fun to wear, although a bit cumbersome for the packed bars and pretty warm (it was 82 degrees in California on Halloween!) but definitely worth it.

I started with cardboard, duct-tape, newspaper and masking tape. This was the hardest part! The end seemed so far away at this stage!

For the eyes I cut holes eyes and glued in the wooden balls. I use the Sculpey clay to shape the noses and then gently peeled them off, baked them in the oven and glued them on. They shrank slightly but still fit fine.

I painted the eyeballs brown and used beads painted black for the pupils. Just painting a black dot didn’t look real enough so the bead really helped the eyes pop.

I painted the whole muzzle area black and lightly sponged over it with grey to help add definition. Then I coated all painted parts with modge-podge to add some gloss. The acrylic paint had a very matte finish.

I drew the lines of the various furs on the head, then traced out cutting patterns with parchment paper. Luckily the heads were very close in size so I used the same patterns for both.

I glued the fur on with fabric glue – very sticky and fluffy fingers after this step!

I cut up a piece of foam pipe insulation for the nails, inserted a bamboo skewer in each for strength and then covered them in paper mache to stiffen them and make them smoother.

After painting, I glued the nails to the inside of gloves (with the fingers snipped off) and glued a piece of fur to the top of the glove. This step was more difficult than I expected because I had to cut the fur at an angle so the edge looked natural over the nails. The things you learn along the way!

I left the underside open so we could still use our fingers to pick things up, pull out a wallet etc.

The matching pocket square was just fabric wrapped around pieces of cardboard. I made the pussy-bow from some fabric I found to match the skirt. That actually came out terrible, my sewing machine butchered it! But it was such a small part of the Sloth couple costume it still served it’s purpose! 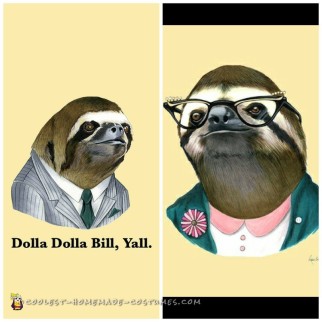 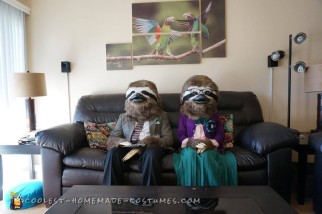 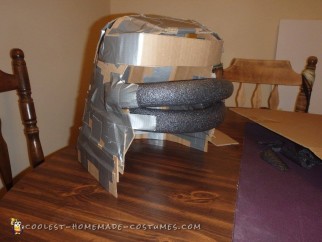 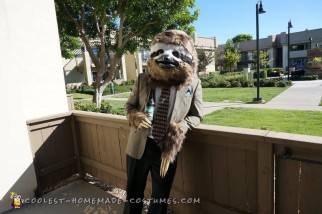 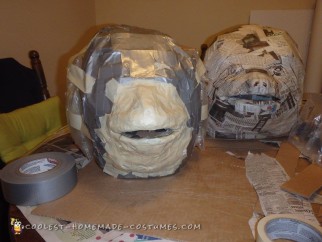 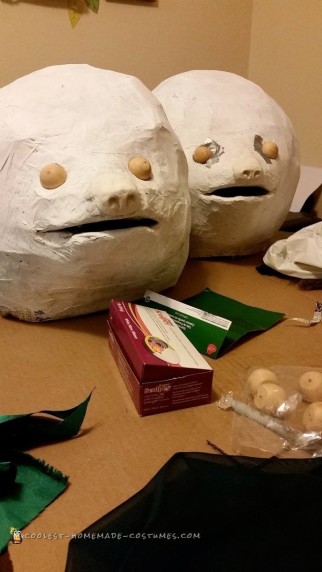 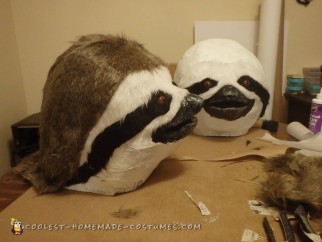 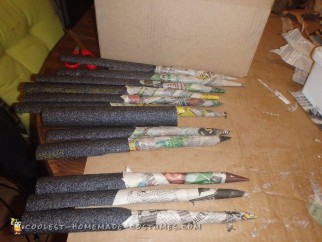 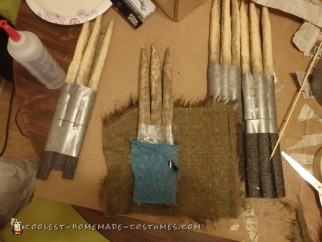