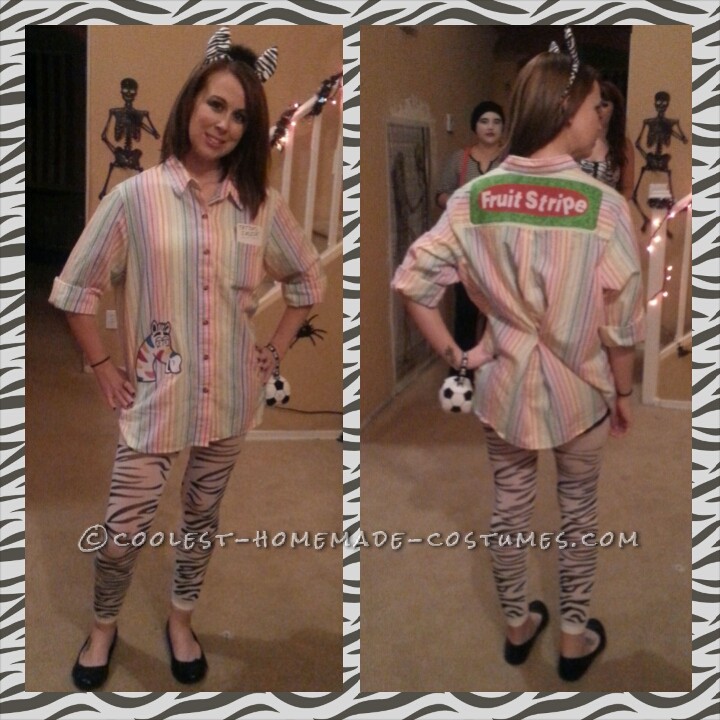 I love anything DIY and especially love making my Halloween costumes! I also love to thrift shop!

June 2014- One Saturday during the summer, a friend and I both had off (We never get weekends off) and decided to go out for lunch and then hit up a Goodwill that was next door. It was one of those Saturday’s that Goodwill has there everything 50% off. I was looking through the men’s plaid shirts because my husband loves them and I had also seen a tutorial on how to make a cute dress out of a men’s plaid shirt. As I was sorting through the shirts, I came across this bright colored stripped shirt and the first thing that came to my mind was Fruit Stripe gum! (If you grew up in the 90s, then you should know the gum I’m talking about! It was great tasting for the five seconds that it lasted and the gum wrappers had tattoos on them.) Without saying anything to my friend on what I was asking, I turned to her and asked her what was the first thing that came to mind when she saw the shirt. And she said “Fruit Stripe Gum.” I grinned big, Exactly! I know what I am being for Halloween this year! We laughed. I bought the shirt because I know if I didn’t, I would regret it because it spoke to me and with the sale, it only cost me $1.50.

I went home, washed the shirt and threw it in the back of my closet.

Beginning of September 2014- I was in Walmart one day looking for dress socks for work and found a pair of zebra print footless leggings on clearance for $4.00. HELLO! Is this costume meant to be or what? I bought them too. Now I was really excited.

Middle of September 2014- My friends and I start planning our annual Halloween party! We start talking about ideas for costumes. None of my friends really had an idea and they asked me what I was going to be this year. When I told them fruit stripe gum, they had confused looks on their faces. They weren’t really sure how I was going to pull it off. I just told them to wait and see.

October- I love to sew but what I wanted to do to my shirt, my machine couldn’t do. So I went over to a friend’s house who is big into quilting and appliques. An applique is a surface pattern that is used to decorate an aspect of a garment or product. We digitized the image of a zebra and made the stripes different colors like the zebra on the gum package. Then we took scraps of fabric and made an applique and attached it to the front of my shirt. Then we used a Silhouette machine to cut out the letters and shapes for the back of the shirt and stitched them on. We first tried to use heat bond and iron them on, kind of like iron letters, but for some reason the letters kept peeling of. So we had to re-cut them in different fabric and stronger heat bond and stitched the shapes on. I also bought a zebra accessory set from Walmart for $5. I think it was for kids, but hey, I need zebra ears and they fit my big head, ha ha!

The day of the party- I went to party city and bought soccer themed tattoos, a few mini $1 soccer balls (I wanted to make a little purse for my cell phone) and I zebra print rub on eyeshadow tattoos. When got home, I attempted to take a part a few of the mini soccer balls to make a purse, but I had no luck on reconstructing them into a purse, so I just took a piece of ribbon and safety pinned it the one I had left to carry it on my wrist. I also drove around to 3 stores (Walmart, Walgreens and a dollar store) and three different gas stations looking for fruit stripe gum. I found one pack of the gum at the dollar store.

The Halloween Party was so much fun! I got a lot of great feedback at the Halloween party and from friends and family on Facebook. I tied with Cousin Eddie from National Lampoon’s Christmas vacation for funniest costume and won most original/creative costume! And of course I gave tattoos to people at the party! 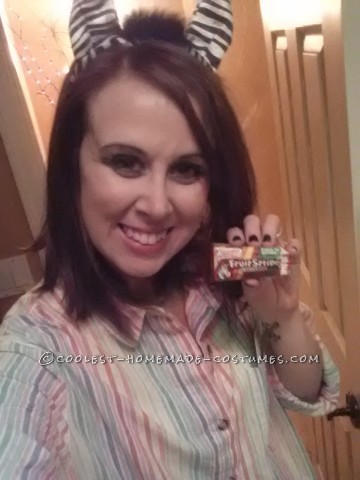 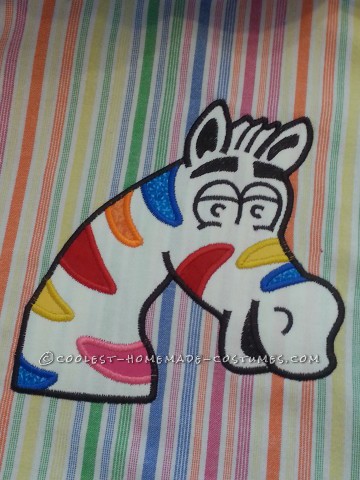 Cool Popcorn Costume Made in 3 Days