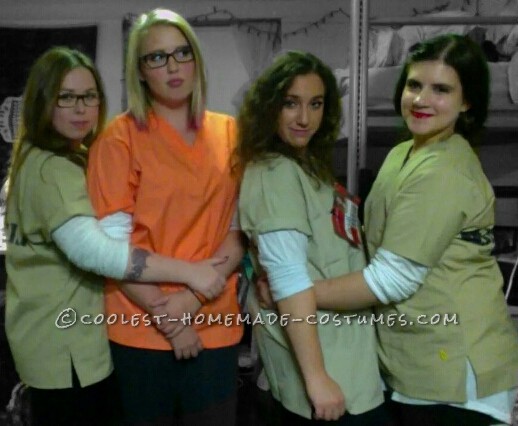 My friends and I are all huge fans of the Netflix show Orange is the New Black. Every year at the college we go to, Ohio University in Athens, OH, there’s a huge block party called HallOUween, it’s the third biggest block party in the country, and everybody dresses up and there are bands and it’s overall a great time. We thought that this would be a great opportunity to dress as our favorite characters from our favorite show! Each of us looks similar to the character we wanted to dress as so it was obvious to us that it would be the perfect costume!

For the shirts, we each bought nurse scrubs. Everyone got tan scrubs except for me, as I was playing Piper, the new prisoner that wears orange scrubs at the beginning of the series. Once we all had our scrubs, we used a stencil set and a black sharpie marker to write the name of the prison, “Litchfiend” on the back of each shirt. We also gave ourselves inmate numbers which we created using our birth dates. For example, mine said “Litchfield #1216″ on it. After we had finished the scrubs, we created name tags for ourselves. We went to Google and searched for a template for the badges the prisoners on the show have. We found one and printed out enough for each of us, then we each printed a picture of our characters face and taped them on the badge where the temple had a space for them. We then wrote the last names of our character on the name tag then covered them with clear tape as a cheap way to laminate them to protect them from water damage. To attach the badges we simply used a binder clip and clipped them on the pockets of our scrubs.

My favorite part of making the costumes was all of the hands on work they required. I love crafts more than anything and just getting to really personalize each costume for each person was great. Really none of my friends are any good at crafting or artsy things, so this gave me the chance to truly shine and get to do a lot of my favorite thing, making art.

Since we wore these costumes to a huge block party, lots of people saw them! We had people stop us in the street to take pictures with us. Other people who had bought similar costumes instead of making them would also come up and compliment them, saying they were jealous of all the detail that we had included. The costumes were wildly praised on social media sites and I don’t think we could’ve asked for a better reaction than the one we got. 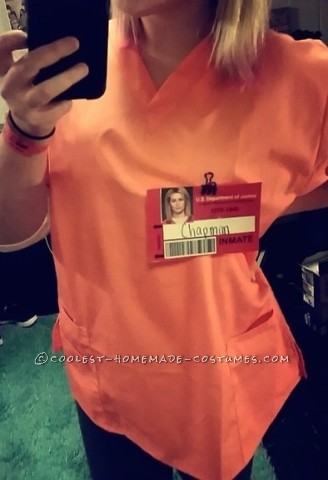 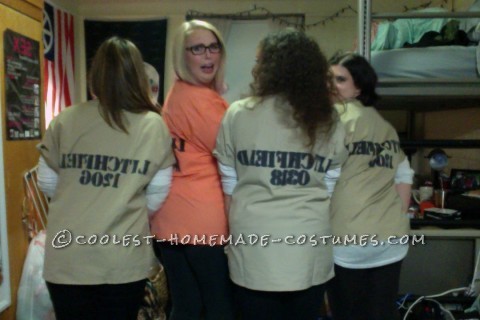