Great Gotham! It’s a day before Halloween and we need a Batgirl costume fast! This costume was created in a couple of hours. After seeing my girlfriend disappointed because a Dorothy Costume didn’t fit her, I began to brainstorm a possible solution. Going back to my childhood, it suddenly hit me like a Riddler’s riddle “riddle me this what’s not a man but still a bat?” Holly Bat droppings – a Batgirl.

I quickly began to gather up the material. Here’s how that went; Oct 30th 6:30 Pm drive to the local Wal-Mart and pick up a black t-shirt one size smaller for that sexy look, about 30min head down to the blue light special at Kmart for a Dracula cape. Next take a 35 second walk to the Joanns fabric next door for the rest of the stuff.

As soon as I got home, I began to put the costume together. After thinking that the Dracula cape was too crappy, I decided to make my own cape out of two pieces of Vinyl fabric, one yellow and one black, cut into the shape of batwings and then glued together with hot glue.

Next I got a utility belt, took an old belt spray, painted it yellow and added the utilities with yellow foam paper. For the Emblem on the shirt. I also used a piece of yellow and black foam board. Finally I finished it off with a cool custom Batgirl costume mask.

My girlfriend dressed up, what a sight! Now it was on to the Halloween party. She got immediate reaction from everybody at the party. Soon we had people lining up to take a picture with Batgirl in her Batgirl costume. The Halloween Party was great.

My best reward was to see my girlfriend’s eyes light up while she was wearing that Batgirl costume. I’ll just have to wait and see what next Halloween brings us. In the mean time, keep safe, and Happy Halloween. 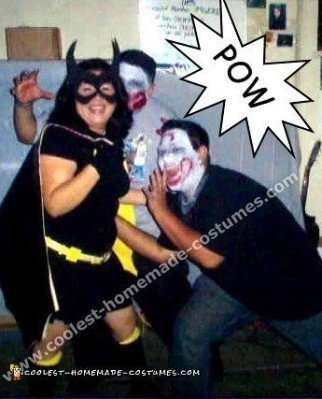