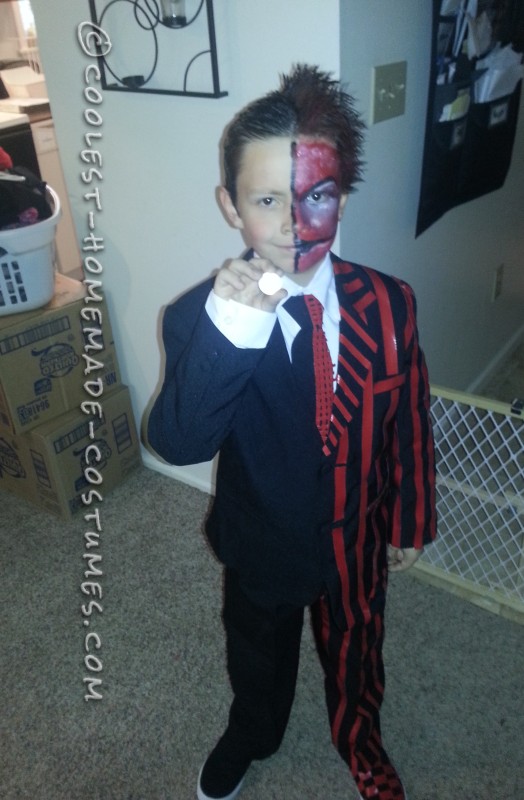 To create this look was a fun and creative process! We searched our local thrift shops and online and found a cheap black suit that came with pants, jacket, tie, shirt, and vest for about $15. Then we bought a pair of black slip on for about $5 from Dollar store then we had to decide on a color. You could choose more than one but we wanted to keep it simple so we went with red. We bought red duck tape.

After getting everything we decided on an easy design of stripes. From there I put one strip on the exact middle of the back of the jacket and worked my way out making sure to outline the pockets. Once the suit was striped I gave the tie a hounds tooth pattern and the shoes a checkered pattern. After the outfit was all taped I then gelled his hair one side slicked back and one side crazy applied red paint to the corresponding side of the face with black eyebrows, a black smile that continues up the check, and a black line straight down the middle for a cartoonish effect.

To make the makeup pop do a white line under the black lips and eyebrow and maybe a little shading on the forehead and cheekbone. Your two face is now ready to find batman and battle! Its funny because when my son saw batman while trick or treating neither one knew what to do… do they battle? Say something to each other?  In the end they ended up waving at each other. This costume is SUCH  an attention getter and actually won two costume contests!