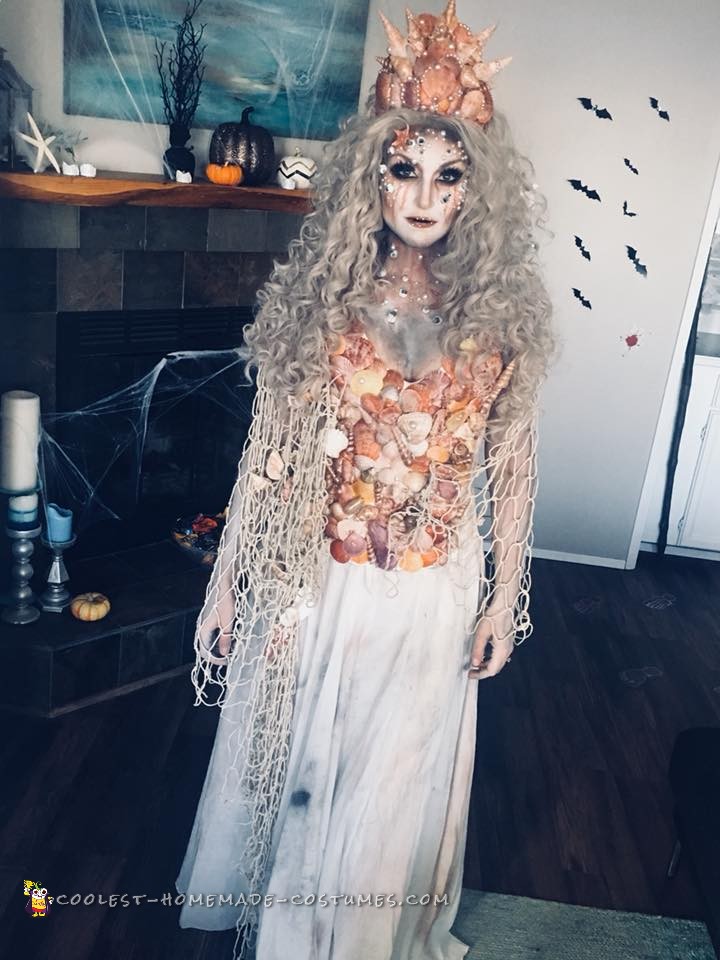 I got the inspiration for this ghoulish sea queen costume from an instagram makeup artist, her name is Kimberly Margarita, but I wanted to really make it my own. We live on the water and the idea of a ghoulish sea queen really felt so appropriate, especially since we had a halloween party at home this year.

This is a very easy costume to do, especially if you cannot sew. It’s all glue and shells. This costume was created with tons of shells and pearls, a headband, glue sticks and glue gun, corset and maxi skirt, and a net, copper spray paint with makeup and wig. Everything was purchased online and built in my home.

I wanted to just be covered in shells so I bought a cheap corset on Amazon and began covering it in shells. I found all the shells in bulk online. I used Gorilla glue hot glue to stick all the shells on. I also covered it in some pearls and finished with a light dusting of copper spray paint. I just kept gluing shells until I liked how it looked.

I found a fisherman’s net on Amazon and glued even more shells to it, like they were stuck in the net. I wrapped it around me like I had been trapped in it. The flowy maxi skirt is a cheap thing off Amazon that I dirtied up with copper spray paint and makeup. I bought a cheap tiara as well to give me a shape for a crown and covered it in shells. I later pulled the tiara from the back and connected it to a thicker copper headband to secure it to my head. That’s about it!

Literally this entire costume is shells and glue. I glued the pearls to my face with eyelash glue and fashioned the barnacles out of molding clay. I got that idea from the makeup artist. It was easiest for me to Google pictures of barnacles and try and recreate what I saw in those photos. For that I used modeling clay and a had a glass of wine! lol

Mermaid Costume Made from Curtains