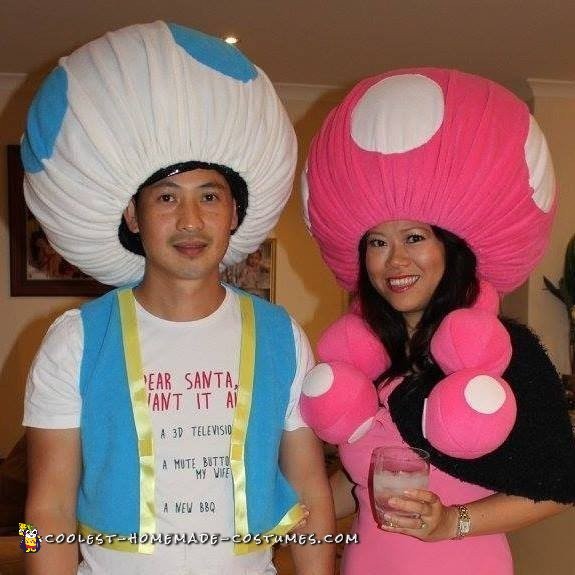 Hi,  I started making a blue toad from Super Mario for my son to attend a family and friends Xmas costume party, but in the process he changed his mind and wanted to be ‘Steve’ from Minecraft so toad was passed to hubby.

I wanted us to be a couple, so made myself a Toadette costume.  At first people were unsure who we were as most of them went for the safe option and brought a Disney princess costume, but we got a lot of laugh and compliments.

Once the initial shock was over, everyone wanted to try it out. It’s a real conversation starting being someone different and making it yourself.

After a lot of internet searching on DIY and speaking to the lovely ladies at Textile Trader, I decided to use fleece as its easier (no over-locking) than other material and sturdier than felt.  I Bought myself a huge bag of stuffing, 3m of ribbon, double sided tape and some strings.  By the way, its all hand sewn, we don’t have a sewing machine and this is my first sewing project in a long time.


I cut the biggest circle possible from the white fleece (~1.2m). I then cut 5 smaller circle with the blue fleece and sewed it onto the white fleece.  Then I folded in the edges of the white circel by 3 cm, leaving a small gap and started sewing.  I hope this makes sense so far!  I threaded the string through the gap and pulled the string to  see how how it looks. I started to think about closing the gap with some sort of home made cylinder hat and filling it with stuffing (as per instructed by other Diy).  Fortunately for me, whilst shopping for novety beer mugs I stumbled upon inflatable an hair wig which is perfect for the mushroom look.  Hence I bought two of them and used the white fleece as a cover, wrapped it around the inflatable wig and we had a mushroom head.  Same method was used for toadette with the pink and white fleece material and the additional step of making cloth balls for the hair.  For the cloth balls I cut 6 curvy diamond shaped balls and sewed them along the edges to make the ball, then I used the double sided tape to stick the white dots on the ball.

To make it simple I just wore a pink dress with the hat.


I used hubby vest as  a pattern and cut the blue fleece into three pieces.  Then I sewed the shoulders and sides together.  I used double sided tape to stick the yellow ribbon to the edge of the vest as pictures.  Because the vest curved a bit, I had difficulty with making the ribbon smooth and there was a bit of a crease in the middle where it curves.  Not sure if you could see it but I covered the crease by  taping a small piece of ribbon across it.  I found it quite easy to make, just time consuming because everything is made by hand.  I’m sure if you’re a sewer, this would be fast and easy.

I want to thank everyone who has posted a DIY costume which has enabled me to make my own! I had a lot of fun making and wearing it. 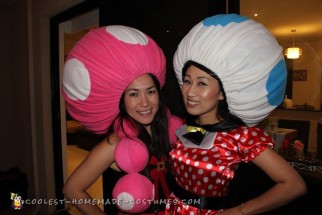 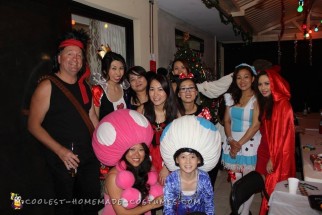 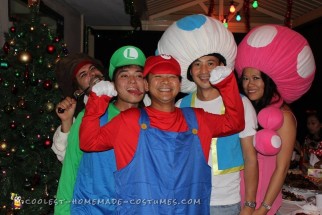 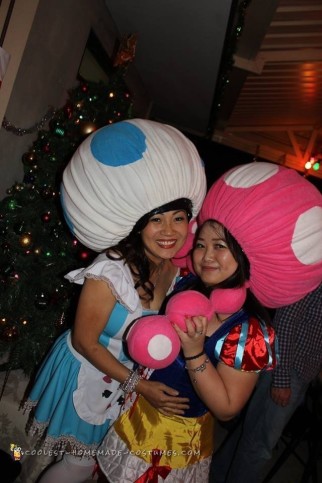