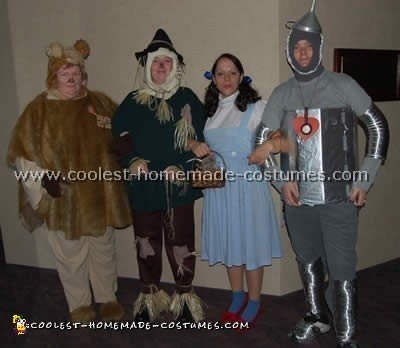 This all started because we were the Spirit Committee at work. So we needed to come up with an idea that would include us all for Halloween. We finally decided on the Wizard of Oz. So we each made our own Wizard of Oz costumes (with some help from each other of course)

Let’s start with Dorothy. She actually got a pattern from her local fabric store and the fabric and made her dress. She then got an old pair of shoes and some ruby red sequence fabric and hot glued the fabric to the shoes. Then she added some hair extensions that were purchased at the dollar store along with a basket stuffed dog and blue ribbon for the hair. She borrowed the oil can from her brother and wrapped it in tin foil.

Now the tin man, she wore a grey tracksuit with a grey ski mask that was purchased at the dollar store. She got a cardboard box and covered it with tin foil and then borrowed a tin funnel and attached a string wrapped with tin foil. Then she purchased a package of dryer vents and cut them to fit on her arms and legs and on her shoes. She also found a small clock and taped it to a cardboard heart.

The scarecrow went to the local second hand store and found an old pair of brown pants and green long sleeved shirt and sewed some patches onto it with straw hanging out. Real straw would get too itchy so she purchased some hula skirts from the dollar store and cut them into pieces and attached them coming out of the bottom of the pants and sleeves. She got a small burlap sack and cut a hole in the front for her face the hat is actually a witch’s hat made of felt from the dollar store turned inside out with straw attached to the rim of it. String was then wrapped around the hat neck arms waist and ankles.

The last of the Wizard of Oz costumes, but not least, the lion. She wore a tan colored track suit and gloves along with a piece of faux fur (from the local fabric store about $20) which she also attached to her shoes. She found the hat at the local second hand store. Then, she made herself a badge of courage and added some makeup on her face.

For Dorothy, I bought the material at WalMart and made an apron at the top with a skirt at the bottom. She wore a plain t-shirt under it. I bought the shoes at WalMart also. I used leftover material to put ties in her hair.

For the Scarecrow, we used an old pair of brown dress slacks and an old sweatshirt. The stuff that I used for straw was bought in the craft section used for curtains. I bought clearance material pieces for patches and then used a piece leftover for a hat. The shoes are house slippers with the straw trim.

For the Tin Man, I bought the shimmering silver material in the craft Dept. at WalMart.

I made an oversized shirt and pants and under is just regular clothes for warmth. On the legs are Welders sleeves. His hat is a funnel found in the auto dept and painted silver.

His tin can is a flower watering can painted also. I finished it off by painting his face.

For the Lion, I used a Winnie the Pooh jumper with a hood that I already had at home and covered the top of it with a tan material.

The straw is made of material in the craft section that you use to make curtains. I put this around arms, feet, and face.

I painted the nose on and whiskers and she was ready to go.

Have fun making your own Wizard of Oz costumes!

Total Spent on all our Wizard of Oz costumes: $60

I bought a straw hat and added a ribbon to hold on to his head. I simply poked it though by the ears to tie aground his chin.

Then, I added patches of material that was lying around in various places on the overalls (don’t forget the back). A thin rope was used for a belt. I added a little brown eyeliner on the nose and red for the checks. He was adorable!

Dorothy was made by my mother-in-law. We did buy a pattern and the blue and white gingham material. She sewed the apron dress part. We just added a white shirt, white tights, red shoes and red ribbons at the end of her braids. We also created a little basket with a dog inside to carry and collect candy in. Red rosy checks and brown freckles topped it off. She made a sweet little Dorothy.

My kids wanted to be the Wizard of Oz group this year.

I made the Dorothy dress.

I used old pants and shirt for the scarecrow and made a hat and glued hay all over the costume.

I spray painted all the bottles, cardboard, funnel, and old shoes with silver chrome paint. Also, I painted 2 big paper clips to hold the cardboard together in the back.

I used scrap cloth for the knees and arms and duct taped them inside the bottles and continued to tape until full arms and legs had been made and taped them into the top arm holes. I glued cut off screws down the front. He even sounded like a tin man as he walked.

The kids loved their Wizard of Oz costumes and they all didn’t take long at all to make, just an hour maybe every few days for a couple of weeks.

Also, it’s a very cheap idea. It cost less than $10 for all three costumes for cloth, paint, and makeup.