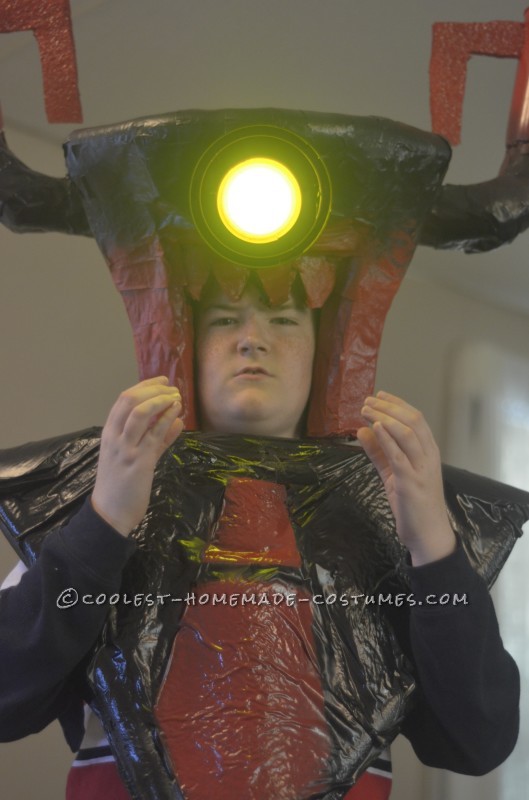 The idea to create a Lord Business costume as my son’s official Halloween 2014 costume was not an easy task. In fact, once I realized exactly the type of character I was dealing with, I was worried.  I kept eyeballing those cheap $5 dollar store costumes every time I ventured out for supplies.

This all began with my son Ethan’s total fascination with movies (he is just like his father). He is quite good at spotting actors by voice or view and naming all of the movies in which they have played. His second greatest past time is making totally mind blowing designs with his lego building blocks. As great as his ideas are, I knew I had to step up my game when it came to building his costume. Unfortunately Lord Business is not a straightforward kind of person. He is very flamboyant. Everything is larger than life on this comedic villain. His costume contains shapes and forms that are not of this earth and most likely found in the Guggeinheim Museum.

Right off the bat, I knew one of two things: I was going to have to pay dearly for something professionally made on eBay, or I would have to do this all by myself. With my creativity challenged and an impending bleak Halloween, I went straight to work combing thrift stores and dollar stores.

Having bought the movie and watched it nearly a dozen times that day, the various shapes that defined this yellow, pint-sized minion of evil (I am talking about Lord Business), came to me much as these ideas of the master builders in that particular film.  I was using things I would have not normally considered using because of my model.

A lampshade back in my day was something of great comedic unrest in the dorm room, but not now. Combining paper mache with layers of children’s Styrofoam flotation devices I was able to achieve something that was professional enough without the cost.

With that done I moved next to the vest that Lord Business adorns. It is equally as fanciful with its football padding-look and quaint red tie. Fortunately for my son’s dimensions, all it took was finagling with a black clothes hamper (I sure could not have fit in it).

The coupe de grace is a mini LED light within a laundry detergent cap. The cap does justice to disperse the light and create an even subdued illumination.