My 4 year-old son’s name is Jackson . Every year I come up with a Halloween costume idea so to incorporate his name with his costume, i.e. (Jack-o-lantern, Jack in the box, Jack of hearts and this year he was Hungry Jack).

To make the flapjacks, you fold the beige felt in half, draw 2 medium circles, cut out and sew inside out, leave a little opening flipping back through. Then add a little stuffing and sew closed. Cut out a small square from the yellow felt and glue on top of flapjack to look like butter.

Take a dark brown permanent marker and draw on top looking like syrup dripping. Then take a hot glue gun and follow the brown marker. This makes it look wet and like actual syrup.

You will also stuff the Pop-Tart same as above, paint the top pretty thick and sprinkle glitter while wet. The rest you just cut out and glue on. This Halloween costume idea is easy to wear and very cute. 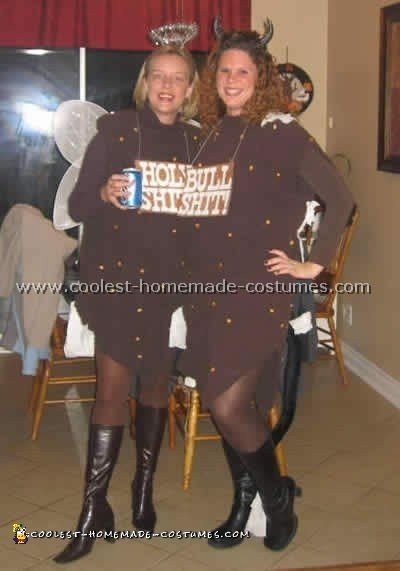 Making Halloween costumes can be very easy. To produce this costume I cut out a brown blanket in the shape of some bowel productions. I then stitched the sides together and the shoulders leaving holes for the head and arms in the appropriate places.

Next I hot glued pieces of corn peanuts and toilet paper to the blanket to look like poo. Wear brown tights and a brown shirt underneath your blanket and accessorize with holy or bull parts. Add a sign around your neck!

Costume by Sherry B., Lincoln Park 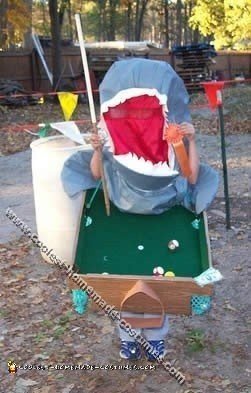 Being short on time my girlfriend came up with this idea after looking at past unusual Halloween costumes that we had made. We took the Shark which was one of my daughter’s favorites and came up with the Pool Shark idea, a spin on the old time Pool Hustler.

On a large piece of cardboard we measured out the size we wanted the pool table to be and cut it out 6” larger on each side to allow for the sides of the table. We scored the cardboard to allow the sides to be folded down much easier. I then cut out each corner to allow for the pockets. We then covered the top of the table with green felt. For the sides or bumper area of the pool table I scored and folded sections of cardboard. I then covered it also with green felt and hot glued it in place. I did this for each side or bumper.

I found some material that looked like webbing or net. It looked perfect for the pockets. I hot glued the material to the bottom of the table and gathered the bottom of the pocket and secured it with a small rubber band making a small tuft in the bottom of each pocket. To make the outside of the table look more realistic I covered it with wood grain contact paper. I found the pool balls in a bubble gum machine. they were super balls. For the ball rack I made it out of the brown craft foam found at any craft store. The cue stick was a wooden dowel we covered the bottom half with the same wood grain contact paper we also colored the tip of the cue stick in blue. We glued play money to the corner of the table. A bungee strap with padding was used around my daughter to hold up the pool table.

Costume by Dorothy B., Effingham, IL 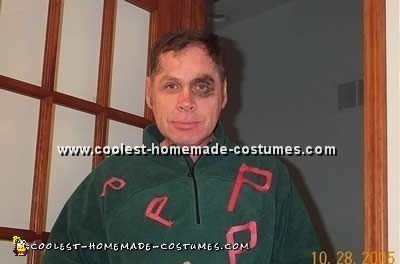 My son has pin-point vision in one eye therefore we needed to find unusual Halloween costumes that would not hinder the vision he has.

He works at a company for the disabled which is located about 40 miles from where we live. So the costume had to be able to travel and last through the day.

They give out prizes for best costume, funniest costume etc. I cut out various sizes of the letter “P” and pinned it to a green shirt that he has. I put black eye shadow around one eye. Thus “the Black Eyed Peas”.

Good luck with finding your own unusual Halloween costumes. 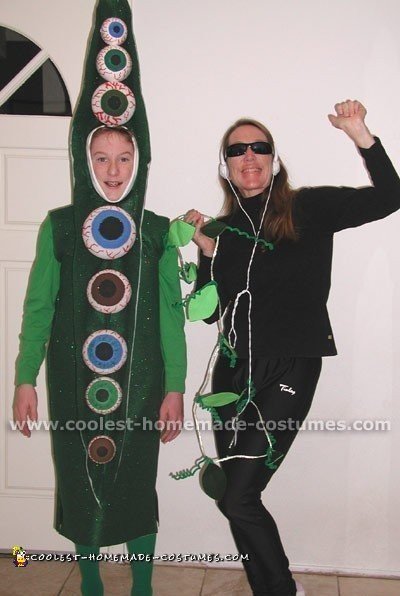 My son had the idea he wanted to be an “ipod Mini”. I thought it would be even more fun to make a pun on the name “ipod” and make him an “eyepod mini” as in a peapod of eyeballs with me as the “eyepod” owner listening to him (just like in the “apple ipod” billboard advertisements we see around the San Francisco Bay Area – the ads show a black silhouette of a person listening to the “ipod” shown in white).

It seemed like it would be one of the coolest and most unusual Halloween costumes., , I simply used one of his sleeveless basketball-style shirts to pattern a lengthier smock representing the body of the eyepod. The body of the eyepod is made out of sparkly green felt from a fabric store. I then cut peapod-shaped lengths of the same material. I used a fabric stiffener. I cut the same size and sandwiched them between the green peapod pieces and sewed them all together so that it became an open, empty peapod. I think you could also stiffen the pod with wires or something similar., , I cut a hole through all of the pieces and the smock so that my son’s head would fit through facing front. I sewed the peapod down the center lengthwise to attach it to the front of the smock. I also sewed a piece of stretchy jersey-type material around the head hole of the peapod so that it would fit snugly around his face. I also cut a length of the large part of a leg of women’s tights to make a hood. I attached it to the back of the neck portion of the smock and also to the top of the jersey around the head hole of the peapod so that the whole thing was stabilized by being attached to my son’s head. I had to cut a face hole in the tights., , Then, I used different-sized styrofoam balls and painted the irises and pupils with styrofoam paint. Yes, there is such a thing as styrofoam paint and it works much better than any other type of paint or pen I tried. After painting the irises and pupils, I set the balls on top of wide-mouth jars so the paint could dry overnight. I used red fabric paint with a fine tip to make the bloodshot eye effect and let it dry overnight., , I then glued industrial-strength Velcro to the balls and to the inside center line of the peapod and Velcro-ed the eyeballs inside the peapod. I bought a white piece of twisted raffia-type string, made and attached green felt leaves with green pipe cleaners twisted in curlicues to simulate tendrils and leaves on a vine. I attached a cheap pair of headphones spray-painted white., , As you see in the picture, my son wore a long-sleeve green t-shirt and green pants. I wore all black and was attached to my “eyepod mini” singing and dancing as we walked along!

It was one of the most unusual Halloween costumes., , Total Spent: $50