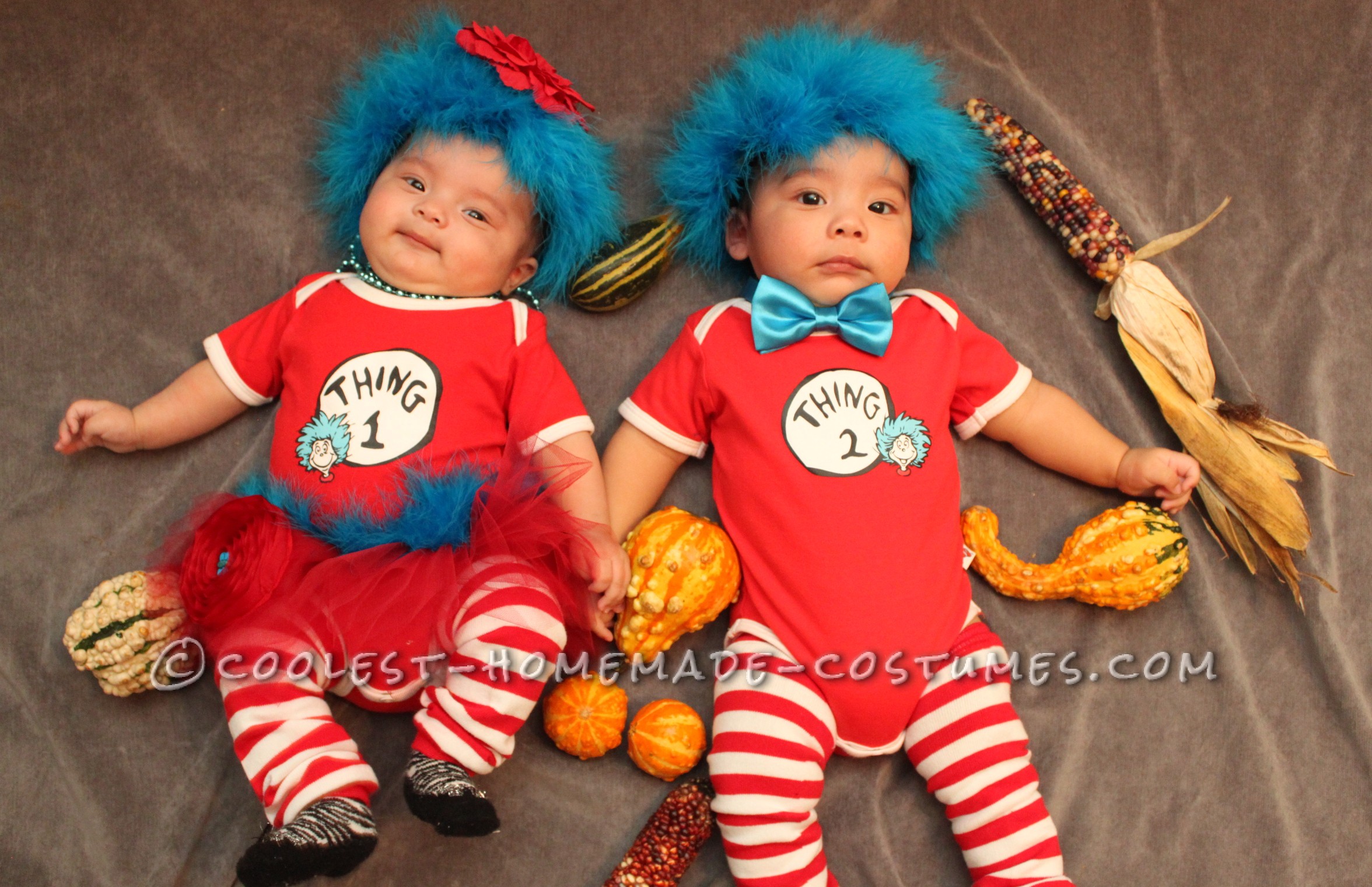 I bought the Thing 1 and Thing 2 onesies for the twins when I was 6 months pregnant (found them at a consignment store for $10 for both).  I wasn’t sure what I was going to do with them at the time but I knew I wanted them to wear them and to take pictures in them.  When hallowen rolled around I knew I wanted to do something home made and different for their 1st Halloween vs running out and buying something from the store that was a already made manufacture costume.  I wanted it to be special and I wanted their costumes to look and feel different for their 1st Halloween.  I thought of over 50 ideas and as Halloween approached I was feeling the pressure to hurry up and decide what I was going to do.  It wasn’t until I was cleaning out their closet and saw their Thing 1 & Thing 2 onesies hanging up that it came to me.  I thought “huuummm…this is a common costume for halloween, but how can i make it special & unique for them?”  So I set out and researched the internet on how Thing 1 and Thing 2 had their hair, the hair color, and the colors and patterns of the rest of their outfits.  I started with their wigs…after all…to me that was the key in making the costumes work.  I wanted the blue wigs to look authentic and fun, so I got the idea from one of my jackets with fake fur to use a boa.  I ordered a blue boa on ebay for $3.50 and cut it in half and sewed the now 2 boas to their beanie hats that they already owned.  It was a mess, there was blue fluffiness everywhere (floating in the air, all over the carpet & all over me & in my hair & on my face).  My husband glanced over at me sitting on the floor in a carpet full of large bright blue lint pieces and asked if I needed help.  I couldn’t say that I did because I didn’t know what I was doing!  Can’t ask for help if you don’t know what you are doing!  LOL!  To keep their legs and thighs warm, I ordered red & white stripped leggins from Amazon @ $4 each.  I wanted to distinguish between boy and girl since that’s what my twins were, so I bought some tulle at Walmart for $3 and made a small tutu by just making cuffs in the tulle and putting some thread through the top of the cuffs.  The top of the tutu looked cheap because after all..I did make it!  LOL!  So I used part of the leftover blue boa and sewed that at the top of the tutu to tie things in better.  I found a red rose at Walmart that was an iron-on for $2; I used that and hand sewed it to her tutu and sewed a blue butterfly button that I had in my sewing kit to the middle of the red flower.  I clipped a red flower hair piece that she already had to her blue wig so that she would look more ladylike.  For my son I ordered a blue silk bow tie on ebay for $3.50 and used that on him to give him that masculine dapper persona.  The blue pear beads that my daughter is wearing was by mistake; we used them to get their attention to look at the camera…then I thought…hey, let’s give them to her to wear.  The pictures were fun to take because my husband and I just couldn’t stop laughing because the costumes turned out so cute and we loved their blue hair wigs.  I laid out a piece of material on the floor to use as a backdrop and gathered some pumpkin gourds & decorative corn from my dining room table decorations & spread them out around the babies.

I sent the photos out to my family, friends, and co-workers and everyone raved over their costumes and how much they loved their blue hair wigs and my daughter’s tutu.  I had my director come over to me and tell me I had to enter the photo in a photo contest because she’s never seen anything like it before, so I decided why not.  I had several people ask me for printed versions of the photo so that they could frame them at home or work.  My best friend asked me what boutique I bought their costumes from because she shops for her son at boutiques.  I responded, “Oh no I’m not paying money like that, I made the costumes myself and only spent $30 on both!” 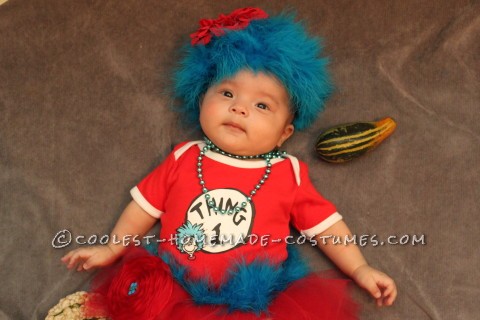 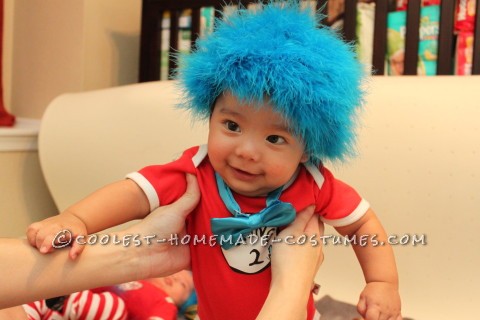