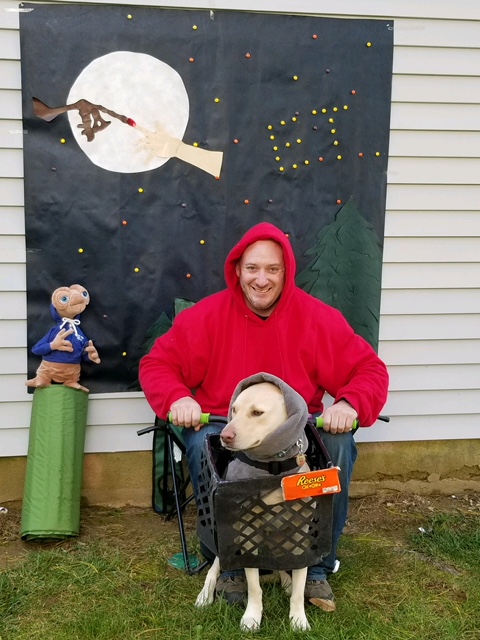 I had this idea of doing a costume together with my dog and decided to go with it. I knew I had to make a basket and could not use one as it would be too firm and hurt my dog.

I took measurements of an actual crate and laid out vinyl I have from work. I work in a vinyl factory. I then cut the measurements out of the basket. I just used some hot glue to to glue the vinyl together. The top of the basket is the actual top of a real basket. I needed some kind of firmness.

I added real bicycle handle bars but just cut them down so they were not too long for him to walk into things. I did cut a slit down the the side of the front corners and put magnets on the bottom corner so when he wanted to lay down it would swing open for him. I also cut a notch in the back of the basket for his head.

I took an old harness I had and used velcro and zip ties to mount the bars to the actual basket. Then used the same material to mount it on the harness. I took a thin microfiber towel and used this for the blanket over his head. I didn’t want anything heavy nor something he wouldn’t like.

We tried this out and he at first gave me a look but then a treat and he was good to go. I also was thinking to myself that it needed one more thing. Since Reese’s was a big thing in the movie I took a Reese’s pieces box, emptied it, ate some of the candy and used the candy left for the back drop in the one picture. I of course just used hot glue again to glue the box to the crate and there we have it.

As for the back drop I made, once again I took vinyl from work and drew evertything out at first and then cut the vinyl and used hot glue to glue on the Reese’s pieces as well as the hand and moon and trees.