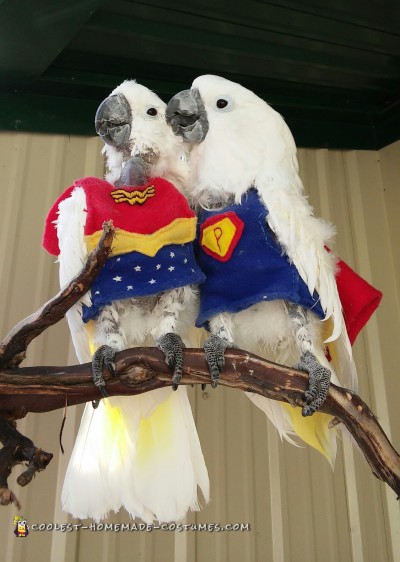 Pearl is Super Parrot and Anna is Wonder Bird.  Both of these girls were adopted by me from a bird rescue in Colorado where I work called The Gabriel Foundation.  They are both female Umbrella Cockatoos that came from bad situations.  Pearl was living in a cage barely bigger than she is and being fed dog food.  Anna was living with two alcoholics and 16 other birds.  They have adapted wonderfully to a spoiled life with my husband and me.

I came up with the idea for the costumes after making the Super Parrot one for Pearl and a dragon for Anna.  I thought it might be fun to make four Justice League character costumes and dress up four Cockatoos for a group shot.  Trying to get four Cockatoos to stand still long enough to get a picture proved to be impossible.

Both costumes, including the emblems, were hand sewn by me without any pattern.  The only materials I used were fleece, embroidery floss, buttons, scissors, and a needle.  I had to keep trying the costumes on Anna (the more patient of the two,) to get the measurements just right.  It’s hard to tell in the picture, but both costumes have capes attached.  The Wonder BIrd costume has star shaped buttons on the sides to keep it closed and the Super parrot costume has yellow circle buttons to match the yellow in the emblem.

When they are wearing their costumes, people often stop me and ask if they can take a picture to show their friends.  There isn’t a market for bird apparel, so this is something different.  The girls love all of the attention they get for their costumes too.  Their wardrobe has increased since I made last years costumes which were Candycorn and a Jack-O-Lantern.  They now have winter shirts, party dresses, and spring time floral shirts. 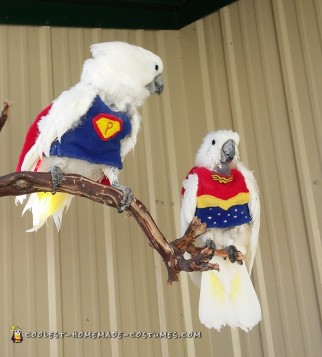