Now that the best holiday of the year is over, and I have a whole year to think of a new costume project for next year, here is my submission. My son is 10 and for the last several years, I have been making his costumes for him. Store-bought costumes are often way too expensive and just not as fun as creating your own. I have come here for ideas when needing to make a costume at times.

This year, he was not sure what he wanted to be. In the past he has been a robot with cool LED lights, a jellyfish (which was awesome; I had found it through this website), zombie,  bathtub full of bubbles, play on words costumes. This year, something changed. He wanted to go creepy, but not over the top gory. We discussed some of his favorite scary movies. A light bulb came on in his young brain. The movie Trick Or Treat. He always was freaked out by “Sam” from the movie. I looked up pictures and thought “okay, I can do this”. And so it began. I was able to find all the supplies I needed at Walmart. The basketball I already had (used it to keep the round shape of the mask).

Materials needed: burlap material (did not measure, I just bought the big pack for $8.00 and some change, yes, you can see through it), twine, Elmer’s glue and water (the old elementary paper mache), big black buttons for the eyes, sweatsuit top $5.00 and bottoms $5.00 ( I could not find a onesie for my son and could not find a white sweatsuit, so opted for the lightest gray I could find), RID/RIT bright orange dye kit, hot glue, hot glue gun, scissors and creativity! You could sew the stitching to the burlap I suppose, but I was a bit lazy and hot glue worked just fine. It ended up saving an enormous amount of time when I noticed the mouth was too low and had to redo it.

I started with the sweatsuit first and followed the directions for sink dying his shirt and pants. It came out a darker more burnt orange to a brown than bright orange, but it worked. I cut out pieces of the burlap and frayed the edges to make patches that I hot glued on his suit. I then moved on to the head piece. I just draped the burlap over the basketball and tied it at the bottom (tight) so I could begin working on the stitching and eyes.

Once I completed that, I then used the skills of paper mache to harden the mask and keep the shape. If you do not know how to do that, Google and YouTube are awesome tools. Once dried, I tried the mask on my son and did some trimming around the bottom of the mask. I then cut some more burlap pieces to tie around his wrists and ankles to complete the costume. Here is the end result! Cool, creepy strangersisk look to it. He was happy and excited to beg for candy in this gem this year. 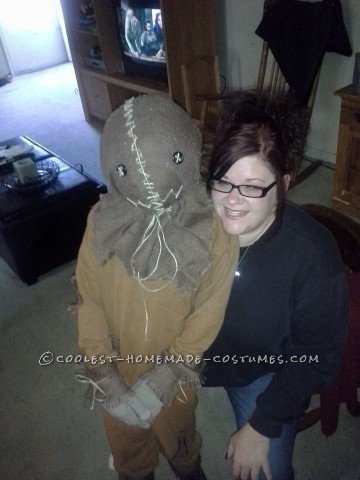 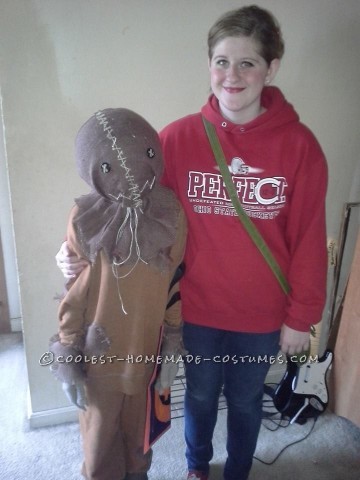 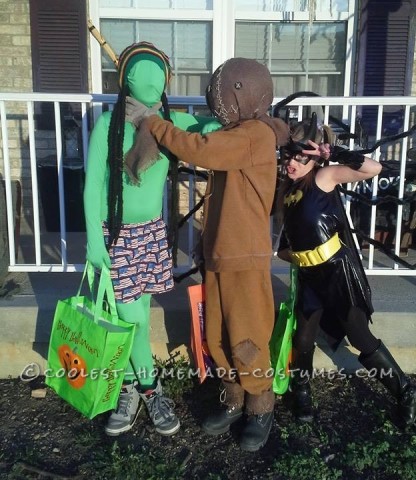 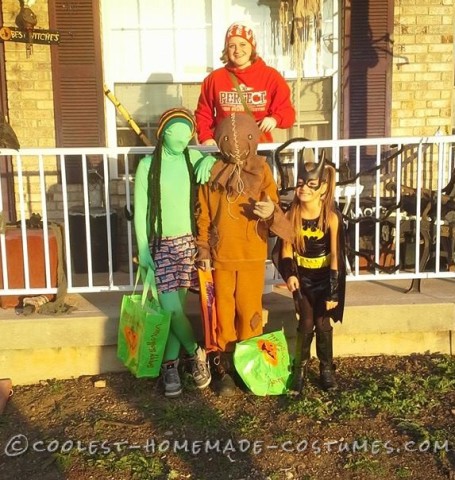