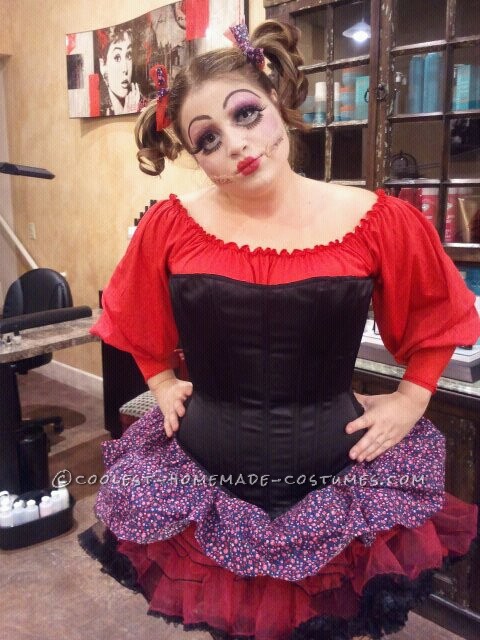 I was so confused on to what I wanted to be for Halloween. After weeks of searching, I finally decided that I wasn’t going to go out of my way and spend a great load of money, so off to the thrift store I went! I ended up finding a costume that was a gypsy costume. Meanwhile I was wondering what I could possibly do with it. So I started to think of cutting the skirt. And then I wanted to poof it up. So I decided to buy leotards and I figured that one was not going to be enough. So I ended up buying 2.

Then I was wondering what is this costume for? So I at first thought of a pirate and then I decided that was going to be lame and boring. No offense to the ones that love to be a pirate, I still haven’t thought of that costume. Anyhow moving along. I then knew that something was missing for the outfit. I went ahead and threw in a corsette and I fell in love with my outfit. So after that I was wondering what to do to with my face. I thought being a dead doll, would be fun and different. Instead of always being sexy and slutty on Halloween I wanted to be somewhat scary. So I started browsing a couple of ideas off of the internet and came across a creepy doll idea. then I went ahead and added one colored contact that was the shape of a spade. Just random but it all went perfectly together.

That night I went to a costume party. The best reaction was that no one knew who I was! I was soo happy to be able to pull that off. The best is to have people guess. So the reactions that I received were absolutely amazing!