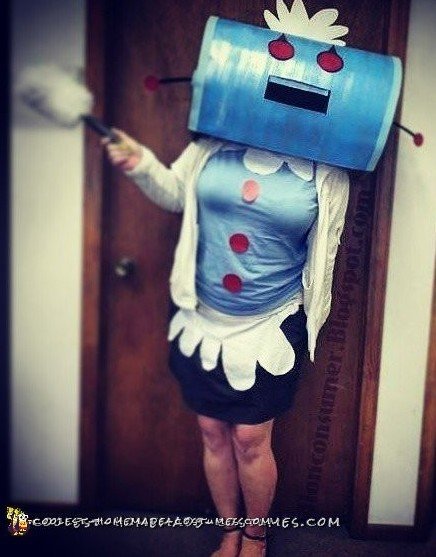 I was inspired to try this by one of the previous posts on this website actually. The mass production of costumes and clothing these days has a massive impact on the environment. Halloween costumes are typically made with petroleum byproducts which are cheaply made and uncomfortable; two things that sound pretty terrible to me.  Also I’ve always believed the old adage that “a penny saved is a penny earned”. Making my own costumes is something I enjoy doing. It’s the journey not the destination right? I loved the Jetsons growing up and this Rosie the Robot costume seemed fun and very do-able for me.

1 large cardboard box – used a plate as a template cut and glued four discs together to make the sides…. The sides are what kept this costume together so I wanted to be sure they were super strong. (It’s a good thing I did too because the head got passed around quite a bit towards the end of the night.)

1 blue poster board- measured and marked a line 1/2 inch in from both of the long sides. Cut slits to that line and folded over to create a surface to glue poster board to discs. I reinforced the poster board with 3″ wide strips of double walled cardboard.

2 black pipecleaners and 1 cereal box,  made up the ears, added eyes, made the red buttons, and top white fluff hat thing.

less than a yard of white fabric (old white t-shirt would work better because it wouldn’t fray) cut out collar, apron, and arm bands and glued or hand sewn.

In order to cover the mouth, I used re-purposed black mesh I had laying around.

Found a cheap blue shirt at the thrift store and all together spent $3 on this because I had everything else on hand.

Walking through doors was less than ideal but other than that this costume was perfection.  The videos taken of me dancing it in are hilarious. Everyone loved it and thought it was clever.  Few people could think of the name Rosie the Robot costume  off the top of their heads but many people lit up when they saw me come in.

Original Rosie the Robot from the Jetsons Halloween Costume