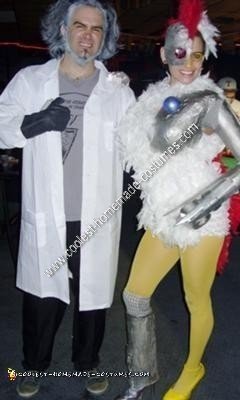 The Story of Halloween 2010

About 2 weeks before Halloween this year, I finally decided that I wanted to dress up as the robot chicken from the opening credits of the TV show Robot Chicken. First, I looked around on the internet to see if there already existed a robot chicken costume that I could just buy. All I found was a pretty cheesy mask that would cover my whole head and obviously cut into my Halloween night beer drinking; not quite what I was looking for. So, clearly, the only thing to do was make the costume myself.

Making a chicken costume didn’t worry me at all; just some appropriately colored clothes, feathers, maybe some sewing involved, but I had no idea what to do about robot parts. My brother, the artist, suggested paper mache and showed me a 5 minute video on youtube on how to do it. I showed him a picture of robot chicken, and he said, “You’re going to do this in 2 weeks??”… So now that I was officially terrified, I was determined to find a little time within each and every busy day of the next 2 weeks to make a chicken costume combined with a paper mache robot.

First thing’s first. I had to make some fake body parts to use as molds for the paper mache. I needed one arm, one leg, half my face, and half a torso. I made each of the upper arm and forearm by cutting several paper towel rolls lengthwise and taping them to each other so that they would wrap all the way around. My leg was a combination of oatmeal and bread crumbs containers and paper towel rolls. Arm and leg molds were covered with newspaper for a smoother surface and stuffed with newspaper for more strength.

My brother had suggested balling up some newspaper the size of my head to use to make my face mask, which I did, but I wanted to make sure it was going to fit as perfectly as possible since this thing was going to have to be on my face all night. I dug out a Mardi Gras mask that I happened to have and taped it to my newspaper head, then wrapped it in cling wrap…. genius!

Similarly, for the torso, I took an old t-shirt, stuffed it with newspaper, put a bra on it, and wrapped it in cling wrap.

I covered these with four layers of paper mache: 2 of newspaper and 2 of brown paper towels, and let those dry for about a day. When they were dry, I cut them a little with scissors to fit my body better. Particularly, I added an eye-hole to the mask and inserted an eyepiece (aka toilet paper roll). The parts fit perfectly; especially the mask and torso.

My robot hand was made out of a bread crumbs container with holes cut out for my wrist and fingers. The sides of this were sort of donut-like cardboard cutouts, one of which had a thumb slot. All of the parts were then spray-painted silver, and in order to make them wearable, I cut up some socks and sewed one into the upper arm and then to the shoulder to connect them, and the other went into the top of the knee. I also sewed 2 elastic straps to the torso to hold it in place while wearing.

Now, a robot ‘wing’ was added to the forearm which was made out of recycled bits from my brother’s Wolverine costume from a few years back. They are stainless steel blade-looking objects which are not sharp but kind of look like they are. You better believe no one tried to mess with me this particular Halloween.

I stuck red feathers into the top of the mask to make my chicken mohawk and secured them with hot glue, and a red plastic gel was added to the eyepiece(tp roll). The torso has a blue orb-like thing in front, which I made out of half a Christmas tree ornament. That about did it; I had half my costume.

The chicken half of my costume consisted of yellow tights for my chicken legs, 3 white feather boas sewn strategically to a white tank top to give the illusion that I was covered in feathers, and one red feather boa attached to the back of a pair of white ruffle bloomers for a tail.

This part of the project actually turned out to be a bit more difficult than I thought. I pretty much had to wear the shirt while I was sewing the feathers to it, as it was made out of spandex and the boas were not stretchy at all, in order to make sure it would fit right. My first attempt at making a tail was to sew individual feathers to the back of my ruffle shorts. This was tedious and completely did not work, so I abandoned that mission and bought one red feather boa which I equipped with a few zip ties and used instead. This turned out perfect.

What’s left? Shoes: I grabbed a pair of old red heals that I already had and painted one silver with the same spray paint and the other yellow with acrylic. I snipped a little of the end of one of the white boas and pinned it to my hair. (By the way, I used hair pins to attach my mask as well; worked great).

Last, I used some good, old-fashioned Halloween make-up for the essence of a chickens face. There you go; I was half robot, half chicken.

My fiance went with me as the mad scientist guy who (supposedly) created the robot chicken. We got his entire costume together in about 20 minutes: white costume lab coat, white hairspray, black goggles/glasses (Party City) and black rubber gloves (Home Depot).

We pulled it off… and not only did I get my costume done in time, but it won $100 in the costume contest which covered the cost of both costumes and our bar tab that night, and I also had enough time left to make a Halloween cheesecake… 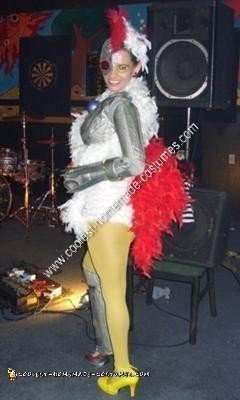 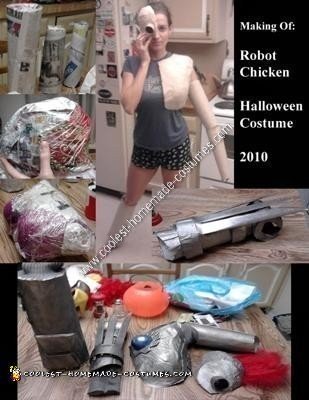 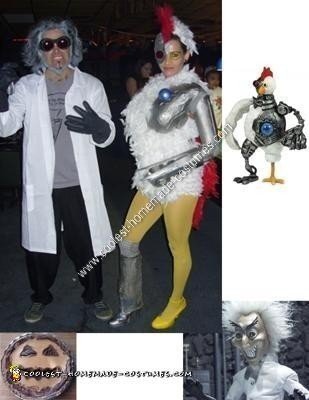