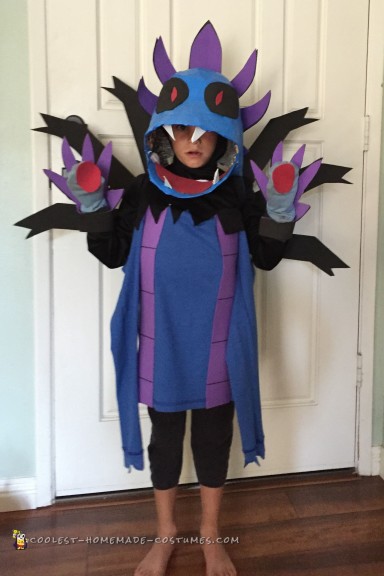 My son Austin is 8 years old and very much into Pokémon right now so when he said he wanted to be a Pokémon for Halloween I did what any full-time working mom of two would do. I hit the internet Halloween shopping websites for the best Pokémon money could buy. Well, Austin had his hopes on being High Dragon which is not sold in any store. I told him this was problematic since I really don’t have the time or well, time to make him a costume. He looked at me with his big green eyes and what was I suppose to do?

I posted my problem on Facebook and an old friend from High School who worked as a theatre props maker sent me some You-Tube videos on using craft foam for costume making.

I made the wings, wrist cuffs and “mane’ out of craft foam. The wings took me over 2 hours to make. I cut out two of each wing and sandwiched wire hangers to make them more sturdy with staples and rubber cement. I cut out a foam overlay to go over the staple job and used duct tape to adhere. Did I mention that most of the costume is staples and Duct Tape! I then used black elastic bands for the arms. I am glad I used foam since cardboard would have probably ripped since he hit everyone and everything he passed by. For the 2 small heads I made sock-puppets and just glued a foam mouth and eyes.

The head was the most challenging part since it needed to look really good and able to see out of. I toyed with making a mask or a hoodie. I ended up going with good-ole paper Mache. I took a baseball hat and put it on my son and then attached 2 foam visors to the hat to create the mouth and then the bottom of the mouth. I used foil and Duct tape to shape around his head. I took the cap out and taped the bottom of the mouth to the sides then poked foam teeth through the foam mouth parts then proceeded to paper Mache. My daughter thankfully helped with that part. Once dry (about 24 hrs) I painted it and then glued the large eyes and red foam mouth.

The body is just an old long sleeve shirt with purple foam glued on. The black neck is a black hooded shirt that I cut up.

This costume survived two nights of trick-or-treating and lots of praise. One kid came up to him and yelled ‘High Dragon’! A man, who knew exactly who it was, came up to me and asked if I made it and commented on what an awesome mom I was. I want to say that it took me all day Sunday and all of my “free” time Monday-Thursday and I will probably not do anything like it again! 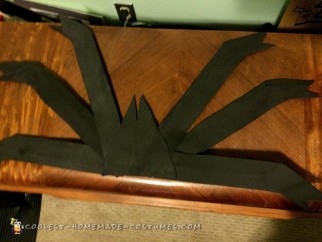 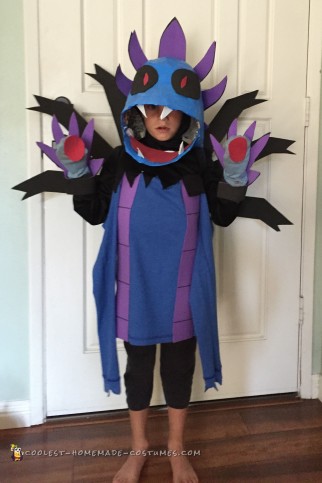 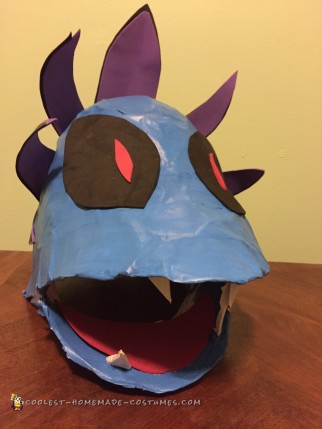