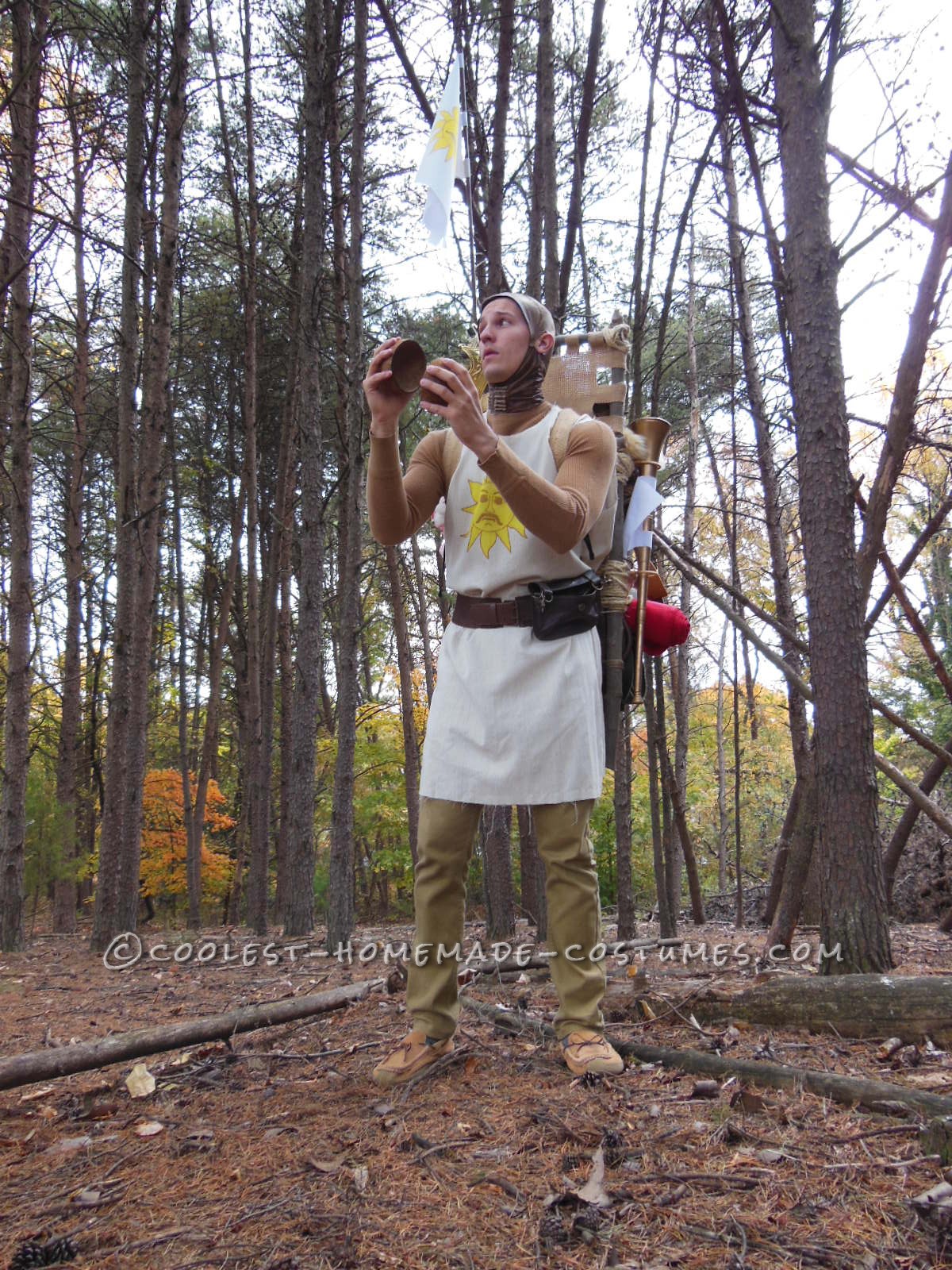 You’ve got 2 halves of coconuts, and you’re banging’ em together.

Halloween was always a fun holiday as a kid because my mother was very hands-on in the making of my costumes. I’d always go with her to the craft store to pick out a sewing pattern and relevant fabrics and watch (sometimes helping) as my costume came to life. Now, as a 25 year old, I still love putting in the time and effort to make a great end-result costume. I try to give myself as much planning in advance so that I have ample time to create my project. Right after Halloween in 2013 I was watching Monty Python and the Holy Grail , and as soon as the opening scene hit I instantly knew that I wanted to be Patsy for 2014. It is a costume not often seen, the movie is a cult classic, and the coconut shells are infamous.

I knew that the large pack would be the hardest thing to create since there were so many parts. I spent months frequenting the local thrift stores and second-hand shops to find the eclectic pieces I’d need to complete the costume. I began by buying an aluminum framed baby carrier, removing excess parts, and then spray painted it brown. I used a woven, hemp-like fabric to cover the backpack straps and padding to make it look more natural. Various sticks and branches I collected after a storm were hand-sawed and then lashed to the aluminum frame with twine to make the whole ensemble look like it was made from raw materials and not metal. I cut up a wicker clothing hamper to use the panels on the backpack to create the illusion of fullness without adding a ton of weight. Used blankets were rolled up and attached with old belts and rope. Miscellaneous pans and wooden cutlery were also added on with twine. Of course I had to find a gold colored metal cup to be my holy grail, and a red sharpie on a used stuffed animal transforms a cute bunny into a rabbit-o-death. I did purchase the crown from a costume shop, and the horn is a stadium vuvuzela that I spray painted gold and added a flag onto. The main flag is simply some scrap fabric and a dowel that I attached to the backpack with a hinged door stop so that I can swing it down to get through actual doorways. I got lucky finding an faux animal pelt and chest-shaped jewelry box to make the pack complete.

The coconuts were delicious, and I used a dremel tool to make the even cut around the shells. The belt and pouch were found in the ladies’ section of a thrift shop, and I just sewed them together and spray painted the belt brown. The pouch fits the coconuts perfectly. The loafers, pants, and undershirt were just from my own closet.

The head coif was also troublesome for me because it had to be custom fitted to my head, and sewing cloth to fit a round object is rather hard. I probably make about 7 versions using different hand drawn and internet downloaded patters before I arrived at a conglomeration of ideas that worked for me. The cloak/robe was rather quick to sew. I used some orange and yellow sharpies that I already had to trace the monty python mustache sun (that I sketched in a vector drawing progam) onto the cloak and flag.

Put it all together and viola!!! Patsy 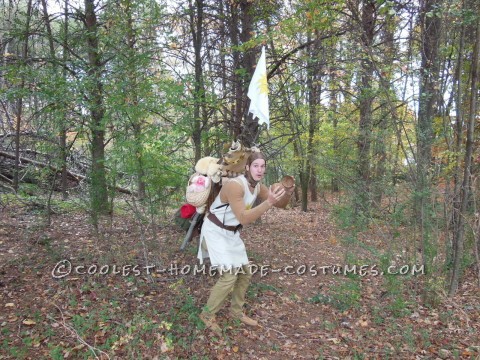 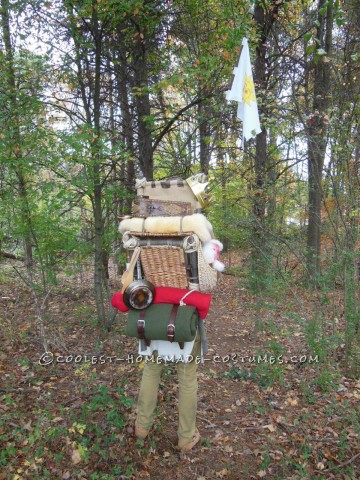 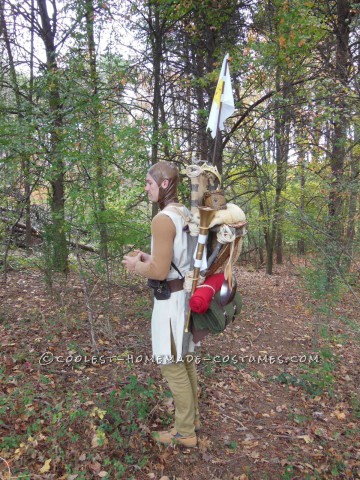 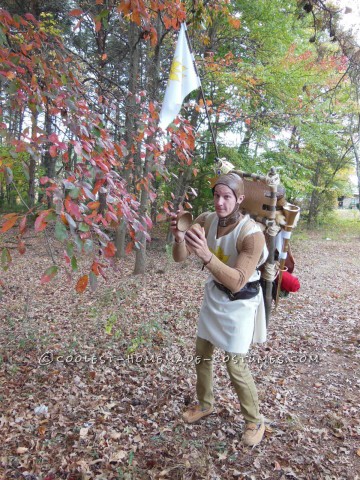 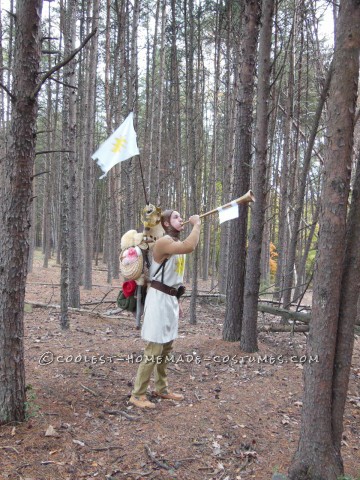 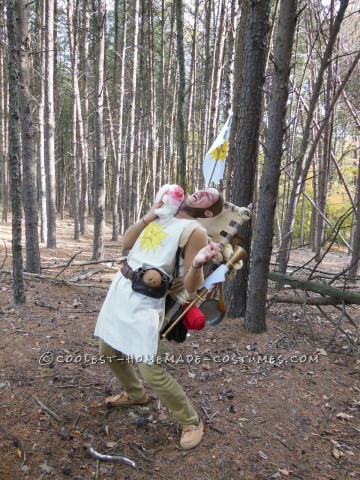 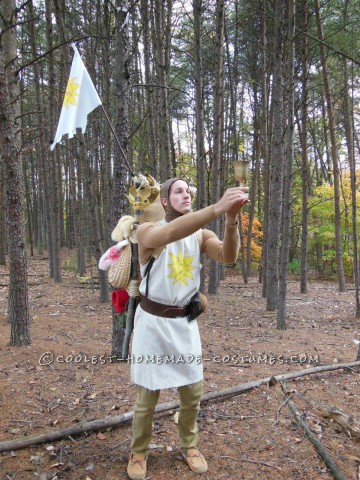 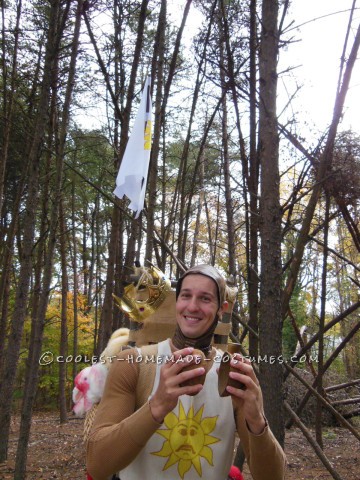