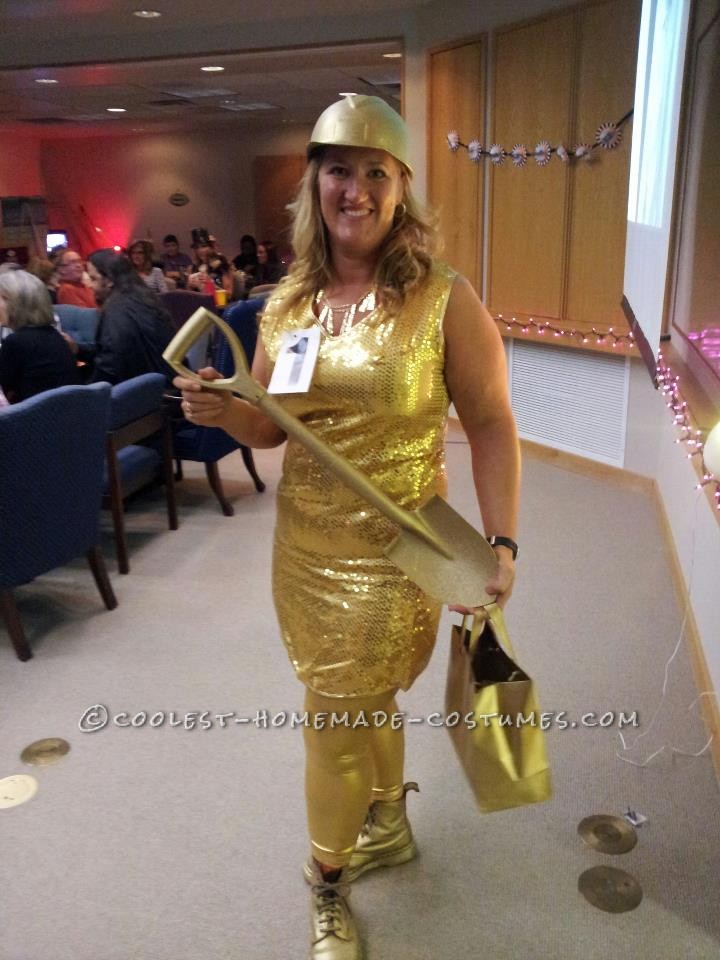 Every year work has a costume contest and I have discovered it is becomming harder and harder to find appropriate coverage in costumes for work. I decided to create my own.

Creating the costume was simple enough once I had the idea. I wanted it to be something funny (a little tongue in cheek) and still be clever. Gold Digger was the idea that made me laugh the most so that is what I went with.

I had a gold sequin dress from a previous costume that i re-purposed. I looked everwhere for a kids plastic bucket and shovel set which was impossible to find, \”summer merchandise\”. I was going to paint them gold and glitter them and tack a few shovel to the dress. That did not work out the way I planned. A quick trip to the store for a small light weight shovel, some gold metallic paint, another stop at a craft store for gold glitter spray and I was set. I had already decided to paint an old pair of bootsthat I no longer wear and I picked up the consturction hat for a party/ costume shop. I also purchase gold leggings. They are not really necessary but again trying to keep hem line appropriate. A couple of evening before I started gold metallic spray painting. I painted the construction hat, a pail I had, the boots and the shovel. The next night I gold glitter sprayed everything. It all looked fantastic and I was covered in glitter. I used an assortment of gold jewelry to wear and painted some crumpled newspaper gold and glitter to carry in the pail. I also threw some mini twix in the pail to add some more gold.

So I had assembled my costume:

*side note after wearing the dress I realized I could have gone as a ray of sunshine!

I spray tan so I made sure to do that the day before to give me a nice golden color and applied lotion with gold sparkles the next day as another layer of my costume.

Everyone loved the costume. I got a lot of laughs and compliments on creativity and the idea in general.

Cutest Magician and Rabbit in a Top Hat Couples Costume