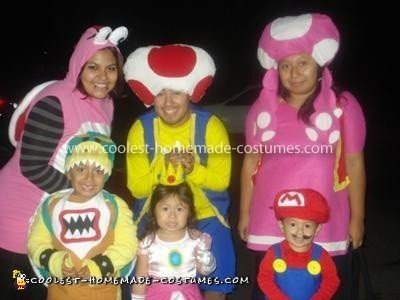 My name is Emma and I handmade all of the costumes shown here. It’s been like a tradition to be resourceful and make nothing into something for our Halloween costumes every year in my family since I was a kid myself and now I get to do this with my kiddos.

Mario(the star of the group):
I had some blue scrap fabric that was enough to make his little overall pants that I just sewed together to fit nicely. Took some huge bottons from an old coat and painted them yellow. Used brown felt and covered some old sneakers. Red top is his own. Finally used a red hoddie and cut it up and made it into his signature cap.

Princess Peach:
I went to a local discount frabic shop and found tons of cheap material that I used for the dress. Kinda just started cutting and sewing and eventually it came together pretty awesome. Crown is felt and added stones to it to give it the gem look. Gloves are from her own closet.

Baby Bowser:
This one came out looking the coolest and definetly most pro looking out of all of the costumes. For the body I used a soft blanket I had and sewed into a one piece, cut an old shirt for the tummy and sewed accross to give it texture. The rest of the details are all made out of felt. The shell, I used some green fabric and sewed hexigon shapes into it to give it texture and made little spikes out of felt. Also this costume took about 2 hrs to make.

Pink Yoshi:
Pretty simple, just used some old pink fabric I had and made it to like a hoodie and attached felt eyes to it. Used same technic as baby bowsers shell for this small red shell.

Toad/Toadette:
Again used whatever left over fabric I had and made toads vest and toadettes vest, dress and hat. For the hats I cut out the mushroom shape and glued beanies inside of them so they can easily slip on and off.

I hope all of you Mario Bros fans approve of how to Make Your Own Mario Bros and Friends Costumes. 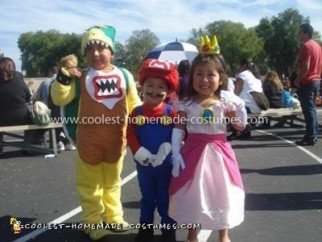 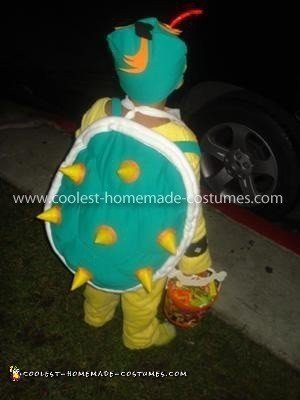 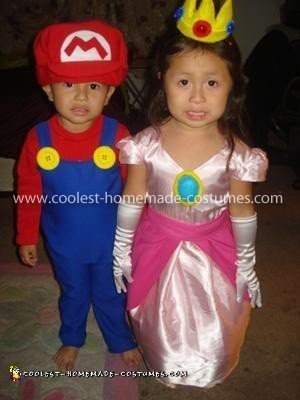