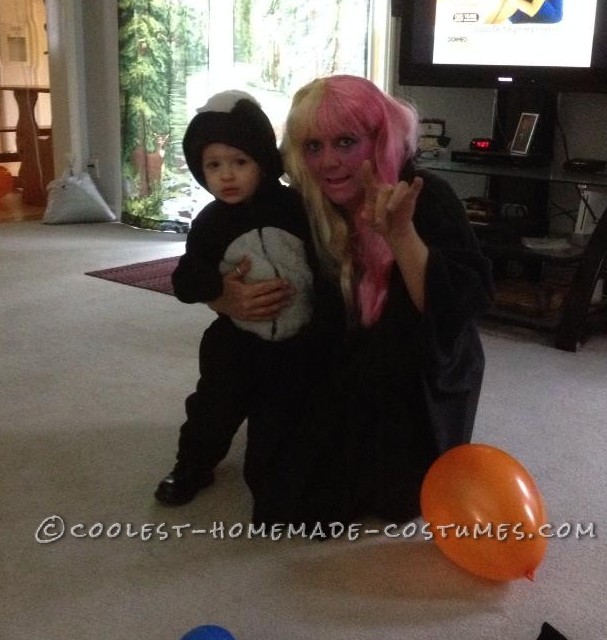 I started out thinking about what I wanted my son to be for Halloween early in the summer this year. I decided I wanted something unique that we don’t see much of. I was looking on pintrest and I came across a baby skunk costume. I thought it was adorable and decided that I wanted to make my son that for Halloween this year. I  started with finding the material and the sweatshirt and pants. I found the fabric at Joann Fabrics. I picked up the sweatshirt at Walmart. I picked up the pants and shoes at a local thrift store. I took some soft white fur and cut it into a circle for a soft belly. I then cut a white stripe for the back of the sweatshirt for the skunks stripe. I hot glued the belly and the stripe on the black sweatshirt. I sewed two pieces of fabric together so that I could put some filling inside to make the bushey tail. I stuffed the tail with some polyfil. I then closed up the tail so that I could sew it onto the back of the costume. I sewed the tail onto the back of the sweatshirt so that it wouldn’t drag on the ground while we were walking house to house.

I put the black sweatpants on to try them on him. I then sewed the sweatshirt and pants together to make it a one piece so that it wouldn’t come apart while we were trick-or-treating. I took some of the left over black fabric and sewed two pieces together on both sides so that I could make two black mittens to keep his hands warm and to blend in with his black costume. I then sewed the mittes to the costume so that it was all a one piece.I found some black dress shoes to go with his costume for his feet. The best part for me was seeing his costume done and the reactions of the people that saw the costume completed. Although it was raining when we were going trick-or-treating we still got to go to a couple houses. The houses that we went to and the people that saw his costume really liked his costume. I liked that it was unique and we didn’t see any other costumes that were similar to his. This was the first year making a homemade costume and I really enjoyed it. It was fun and I like that it was unique and there were none of the exact costume. I liked that you could hear everyone saying hoe adorable his costume was while walking down the road. It was very rewarding and showed how all my hard work payed off in making his costume. 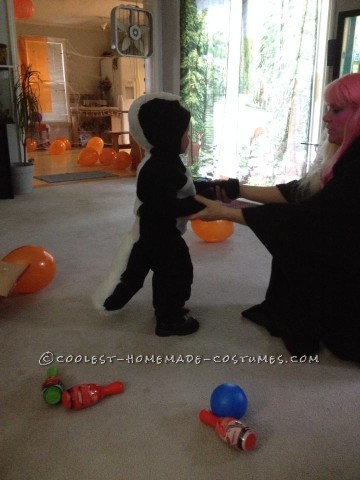