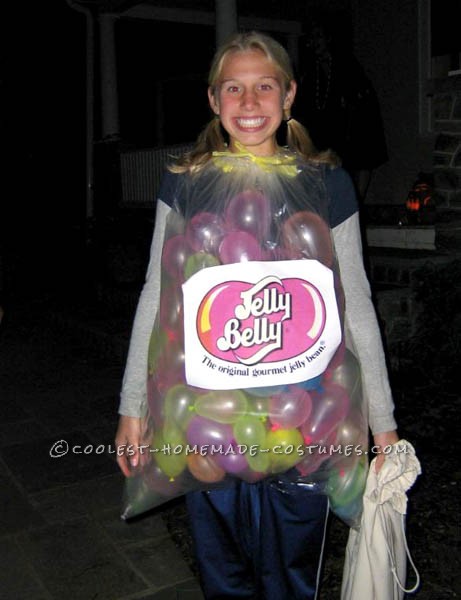 It was October 29th. Me and my daughter were trying to make a homemade costume for a costume party. A peacock costume? No feathers I said. A cowgirl? No hat. A witch? No broom. We just couldn’t find any homemade costume around the house. So then we gathered all the possible things around the house. Mini water balloons, a clear garbage bag, yarn, and tights. I GOT IT! my daughter yelled. I can be a……..bag of jelly beans!  Really. That’s yours idea. That’s so cool! I said.

So she blew up the balloons and I put holes in the clear bag. Then, 20 minutes later, we were ready for the costume party! She got so many complements at her best friend’s costume party. Soon, they were on the trampoline. My daughter fell off the five foot trampoline and didn’t feel a thing. She had so many balloons in the clear trash bag and only a few balloons popped. And this costume was only $0.00 and great for last min. I am really hoping that I can win the cash prize so I can get my lovely children better costumes.