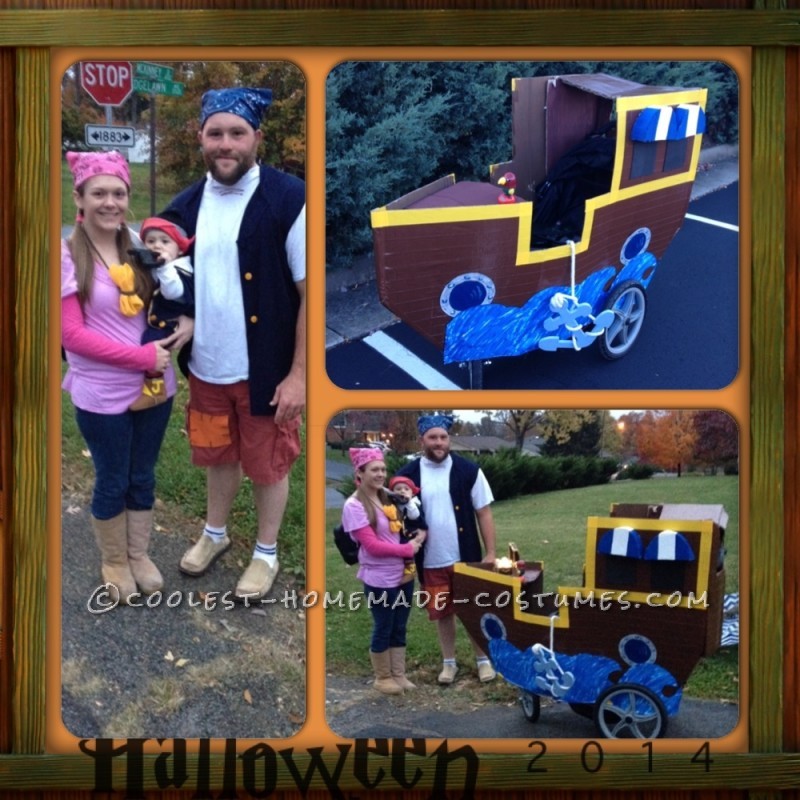 It took two and a half months to make the ship. Made entirely out of cardboard and duct tape, and put together using a hot glue gun and super glue. I came up with the idea when my then four month old started to “watch” the Disney show “Jake and the Neverland pirates”.

I got on Pinterest and that is where I was able to find exactly how to create it. Figuring out just how to fit it over the stroller and make it portable was the most difficult thing. As soon as I figured everything out,  it took off, and I was enjoying every second of it. Especially  the quality time it gave my family and me. The ship took two big boxes, one yellow roll, four brown rolls duct tape, and an entire bag of glue sticks. I wanted to make it where you could fold it, so I added Velcro to the sides and back. That way, the back comes off so it is easier to transport.

The windows was foam paper and above, I taped tea lights so it looked as if their were candles lighting them.We had a lot of the clothes already, but what we did not have we got from Goodwill. Jake’s boots was just a regular pair of snow boots, but I was able to cut the J’s and cuff’s out of yellow felt. The vest was a blue shirt that we cut the sleeves off and  cut down the middle. My grandmother sewed the gold trim on and the gold buttons on to it. The treasure chest was an old jewelry box. I glued brown felt and the gold trim to it, then I added the jewels all around it to make it look more like the real thing.

Inside I put a light strip, so you will be able to see the coins and jewels. The waves was a white poster-board cut and painted blue by my mother. On them, I put blue glow sticks so the water would look like it was glowing. Everything came together perfect and my son really enjoyed all the attention. We got stopped numerous times and our pictures taken too. On Halloween night it did rain and some parts did not hold up as well as others, but it was so worth it!