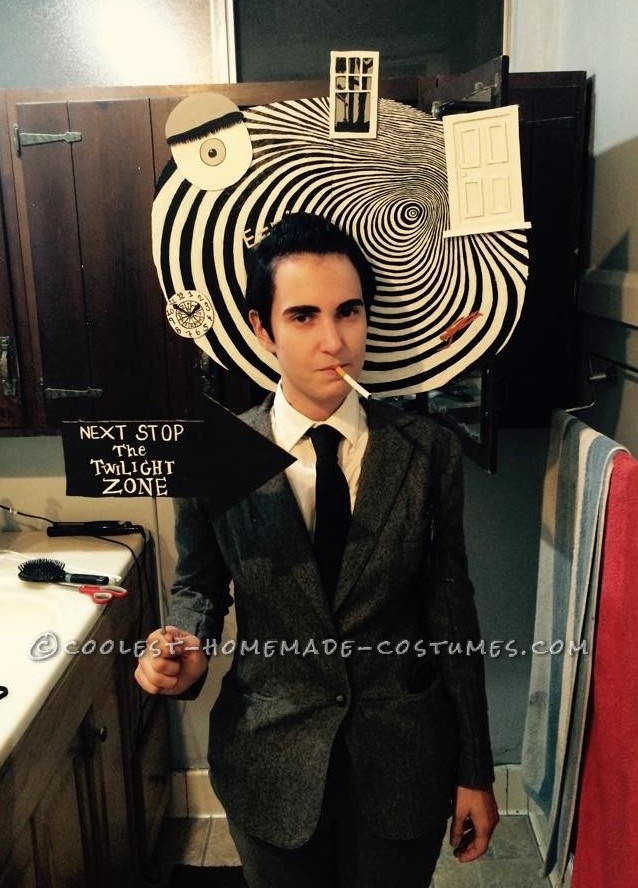 I’m a huge Twilight Zone nerd and so this year, after having chopped off all my hair a month prior, I decided it was due time I gave a Halloween nod to the show’s host, Rod Serling. I always make my own costumes, but this year definitely took the cake in terms of how elaborate I ended up getting.

The most difficult part was figuring out how to make the costume obvious enough so I wouldn’t be answering the question, “Who are you supposed to be?”, all night, as I feared would happen if I just showed up in a slim grey suit. I love to build things out of cardboard and since I just moved, I had a lot of it still laying around the house for future projects. I used one large box to create the spiral backdrop and spent a good three days painting it/going out my mind because my hands are not steady enough for all those little lines.

I rewatched the intro to the show and decided to also create the eyeball, door, window, clock, E=mc2, and the doll out of cardboard and have them floating by like in the opening sequence (there are several versions). All the individual pieces are 3D and were glued onto the board once finished.

The suit I sourced from two different thrift stores and then, as is my way every Halloween night, I ended up tailoring the fit right up until we were nearly out the door, mostly because I was creating extra props like the “Next Stop The Twilight Zone” sign and breaking apart a pair of fake glasses and glueing the lense shards back in as a nod to the “Time Enough at Last” episode. I had my boyfriend affix the sign to my back using two broken plastic clothing hangers and liberally taping it to the back of my shirt.

Overall, I was really stoked with how this costume turned out. Spending almost a week painting and repainting a spiral, in addition to running around town trying to find semi-matching suit pieces, my enthusiasm was at times pierced by the thought that no one might end up knowing what the costume was and I would just be that girl at the club with a giant piece of cardboard taped to her who was inconveniently in everyone’s way (not to mention that my boyfriend crippled over in laughter as soon as the whole thing was on, making me feel somewhat ridiculous).

However, those fears were thankfully assuaged by the many kind compliments that I received from strangers asking for photos and from my friends trying to get me drunk enough to participate in the costume contest at the club we went to (which ended up not being something that civilians could enter for some reason). Surprisingly, the costume itself, save for the most physically awkward cab rides ever that night, allowed for pretty free range of movement in the crowded club and didn’t get in the way of old Rod getting his Halloween dance on!