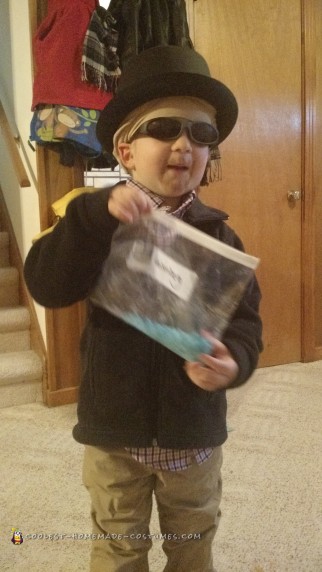 My husband and I are huge fans of the show “Breaking Bad” and wanted to pay homage to it this Halloween. However, rather than creating an adult costume, which we knew had been done before, we dressed our 3 year old as “Heisenberg” the meth making alter-ego of the main character Walter White. Our son has a history of dressing in unconventional costumes, for instance he has been Donald Trump and “The Dude” from the movie “The Big Lebowski” and we continued the trend this year.

The hardest part of creating the costume was finding the right hat in a size that would fit a child. The pork pie hat is Heisenberg’s signature and luckily I found one on Amazon that was perfect, and only a little large for his head.

The next challenge was making my son, who has thick hair, look bald without having to shave his beautiful hair. I accomplished this with a pair of nude pantyhose that achieved the look while also helping the hat fit better. The black windbreaker coat and plaid button down shirt were bought at Kohls.The khaki pants are ones that we already owned. I used brown eyebrow pencil to shade in his face to look like the mustache and goatee of the character.

To top off the look, we smashed blue peppermint candies in a ziplock bag to resemble Heisenberg’s signature blue meth. Our friends and family were not surprised by our rather untraditional costume, but were shocked at how much our son looked exactly like still shots of Heisenberg and fans of the show appreciated our attention to detail.

Many declared that we had “won Halloween.” Our son has been a great sport in dressing up in costumes that fall outside the typical range of toddler interest. We think that his costume is unique among children his age and portrays rather accurately the character of Heisenberg.