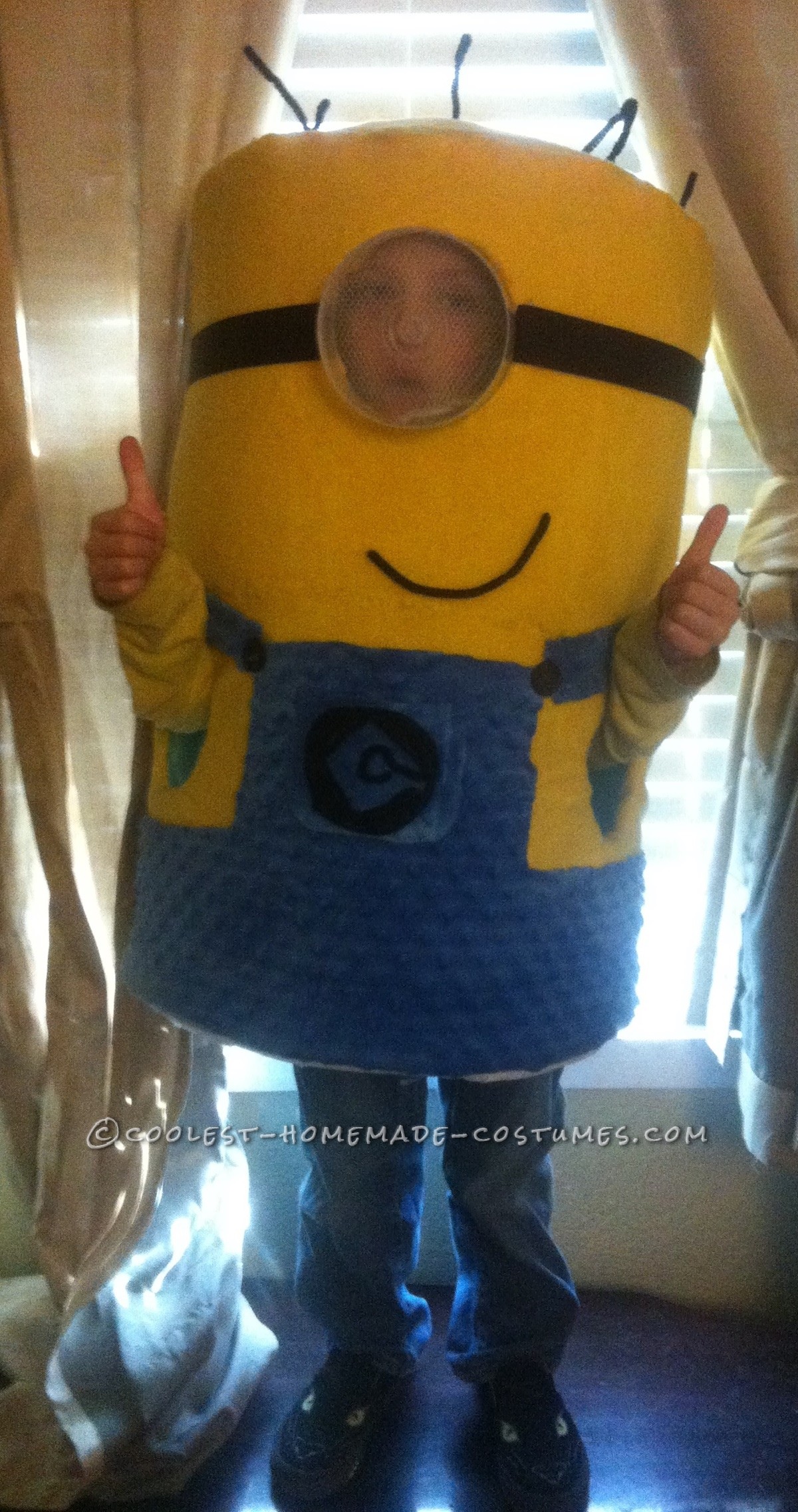 I bought my son an inflatable Halloween costume and he was so excited! After attempting to have him try it on it was clear that this was just not going to work. He had a meltdown and was completely terrified of the costume.

That is  when my creativity kicked in to overdrive with only a week left to  make a costume. The internet search was on. After all the ninjas, ghosts and vampires, I stumbled upon a cute little yellow man! At last I knew that i would be making a minion costume. I looked around for ideas and found some that inspired me to create my finished product.

This costume was surprisingly cheap to make as everything was on sale or a remnant piece.

The response I got from this was amazing! I took it to the kindergarten class and everyone wanted to wear it, including the teachers (who i reassured it would not fit).  Once Trick or Treating began we were getting comments every second, from look its Sponge Bob to  OMG a Minion you made my night. People were asking if it was homemade and telling me how wonderful it was., There were even people stopping us to take pictures.

I took him to the local contest and we won a family prize for both boys dressed  up.

The one issue that we did have with the costume is that it was too hot and the eyeball kept fogging up. My advice would be to cut the end out of the eye and it would solve to problem.

Find something that you know you can make work. There are a lot of creative ideas out there if you look for them. Or go with your vision, have something in mind, go to the store and find things that will work.

Foam (enough to wrap around hamper)

Yellow Fleece (enough to wrap around foam and top)

Blue fabric (enough to go around the bottom of the yellow)

Now wrap the foam with the yellow fabric and glue in place. At this point you can cut a circle out of the yellow for the top and glue on making a seam.

Next wrap the blue around the bottom of the yellow. (you will cut this later to create overall and straps)

Cut holes for the arms and for the eye ( I placed my child inside to find out where his head would be so i could cut for the eye, this is how he was able to see)

Now cut the blue down to look like overalls ( i used a picture of a minion) We were able to cut strips from the fabric to use as straps. Glued them in place with buttons.

Next i glued on the eye and black ribbon to create the goggle. ( i would cut the end out of this if i did it again)

The rest was detail work like hair and mouth and logo on the pocket for this it just took some imagination and pipe cleaners. 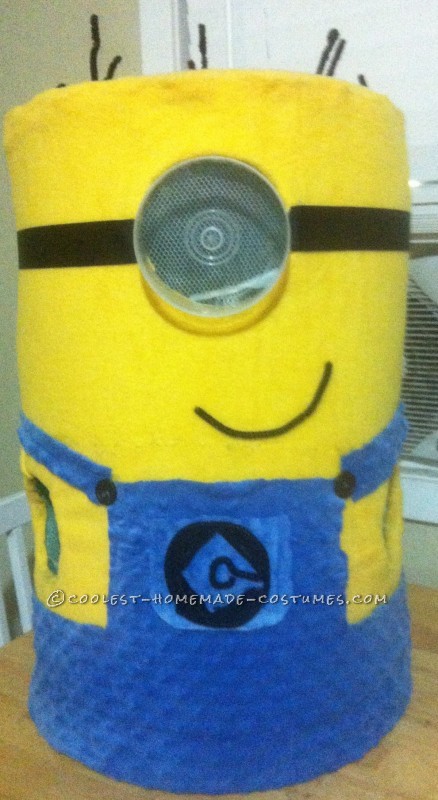 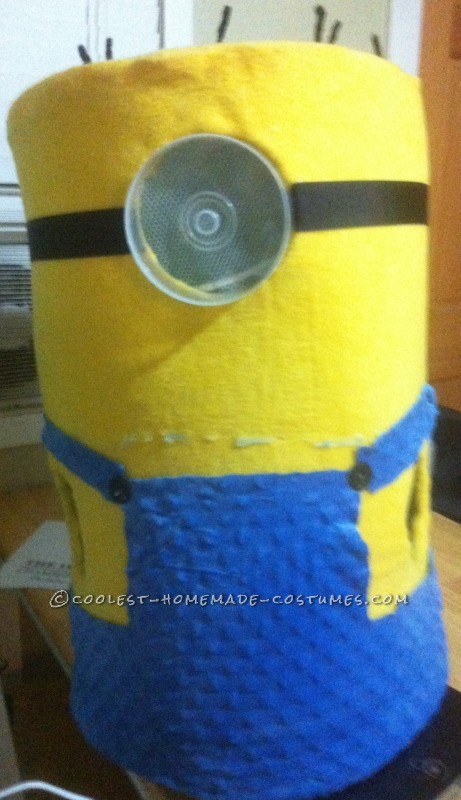 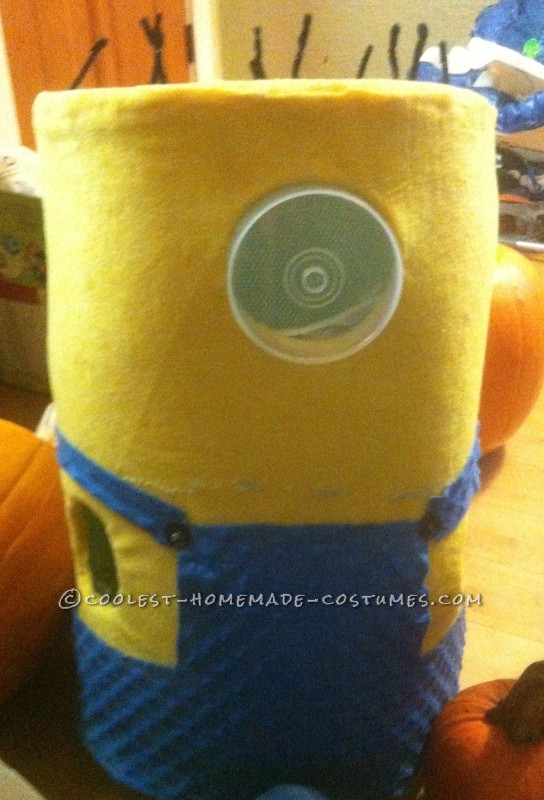 All that is left to do is go show off your hard work! People are sure to stop you and take pictures with your little minion! I was amazed at how many people did not know what a minion was but still absolutely adored the creativity of the costume! Most of all Have Fun! 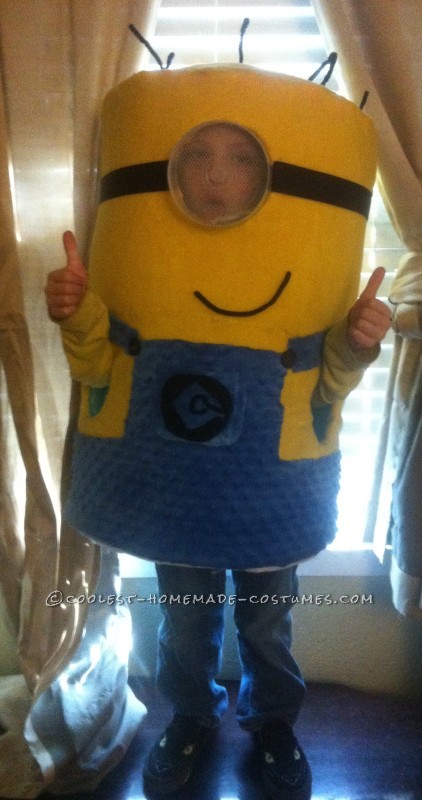