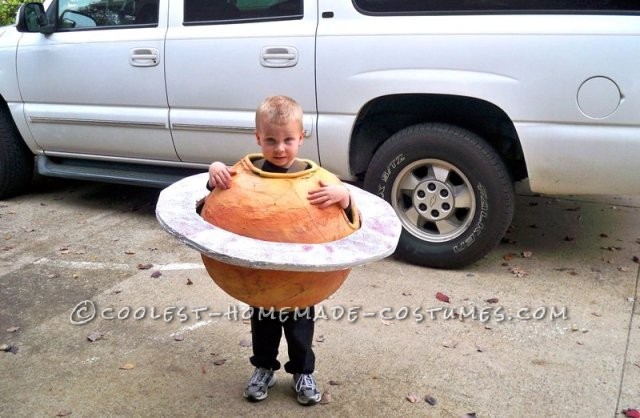 Our 4 year old boy is obsessed with the solar system. So when we asked what he wanted to be for Halloween he said ‘Saturn’. Where do you find a 3′ round ball / sponge / foam / anything to fit over a 4 year old and be rugged and light weight?

My wife had an idea to use paper mache over her pilates’ ball. She made the standard mix and did approximately 4 coats of shredded newspaper over a couple of days. On the final coat we used a heavier mix of glue with a layer of cheese cloth. This ended up being a little rougher texture then we wanted but in the end turned out to be perfect for the paint scheme we came up with.

We made cuts on either side for his arms (oval holes) with a sharp thin blade utility knife. Next was a hole for his head. We then had him try it on. At this point we knew we needed to add some sort of strap inside so Saturn would rest on his shoulders and not his neck. The bottom of Saturn came just above his knees so it was pretty easy for him to walk.

I took an old cloth belt and cut it long enough so it set on his shoulders inside of Saturn. I attached it using 3/16 M aluminum rivets with washers so it wouldn’t pull through Saturn or the belt.

Next was a paint scheme. It went from a cool dark blue / purple to a white primer with yellow, then streaks of orange and red, top coated with clear glow in the dark spray paint.

Next was the ring, we thought about cardboard with tin foil, then I came up with taking a metal tomato stake thingy and cutting the bottom and middle rings off, using the large ring at the top, putting it over his head and running the wires down the side of Saturn and through a piece of 3/4″ white flex PVC pipe bent in a circle. I liked it, my wife didn’t.

I went back to Lowes a few days later and saw a 4’x8′ x 1/2″ of ridged foil foam insulation (foam-x). I got one sheet and we cut it just large enough for it to slide down Saturn just below the arm holes and made the outer ring about 7″ wide. We got two rings out of that one sheet so we use foil tape to tape the two pieces together making a 1″ thick ring with made it really strong. The foil tape is strong too.

My son and wife used clear glue and added red glitter and some glow stars on Saturn’s ring.

We used some round closed cell foam insulation to line the neck and arm holes with and believe it or not we were ready to orbit.

The ring was light and removable; Saturn was light and come off real easy. My son wore a black outfit underneath and seemed very comfortable.

HE LOVED IT and didn’t want to take it off.

OMG, people loved him, everyone stopped to take his picture and ask him about the solar system. He was such a great Saturn and answered everyone’s questions and said ‘Thank You’ every time. I am so proud of him and his costume idea. 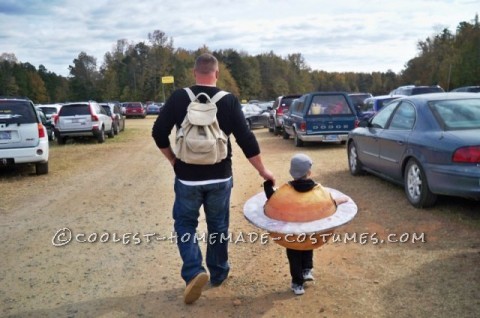 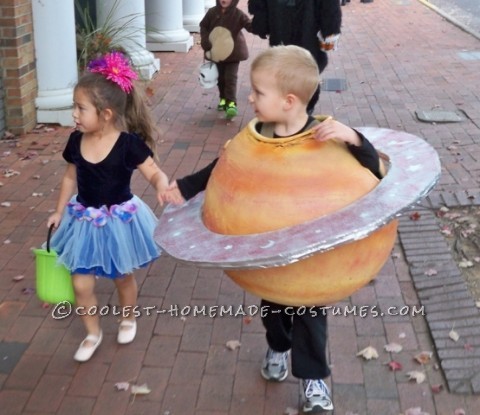 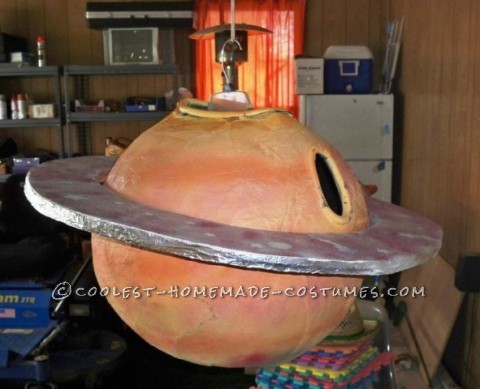 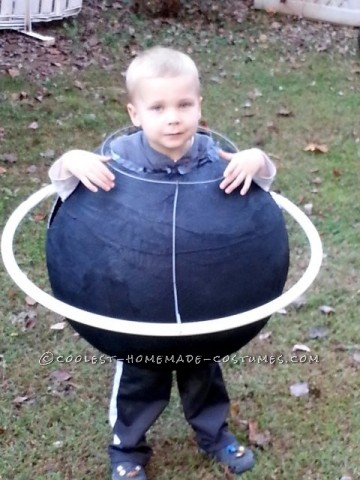 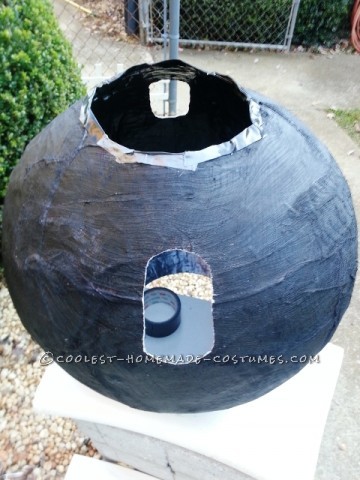