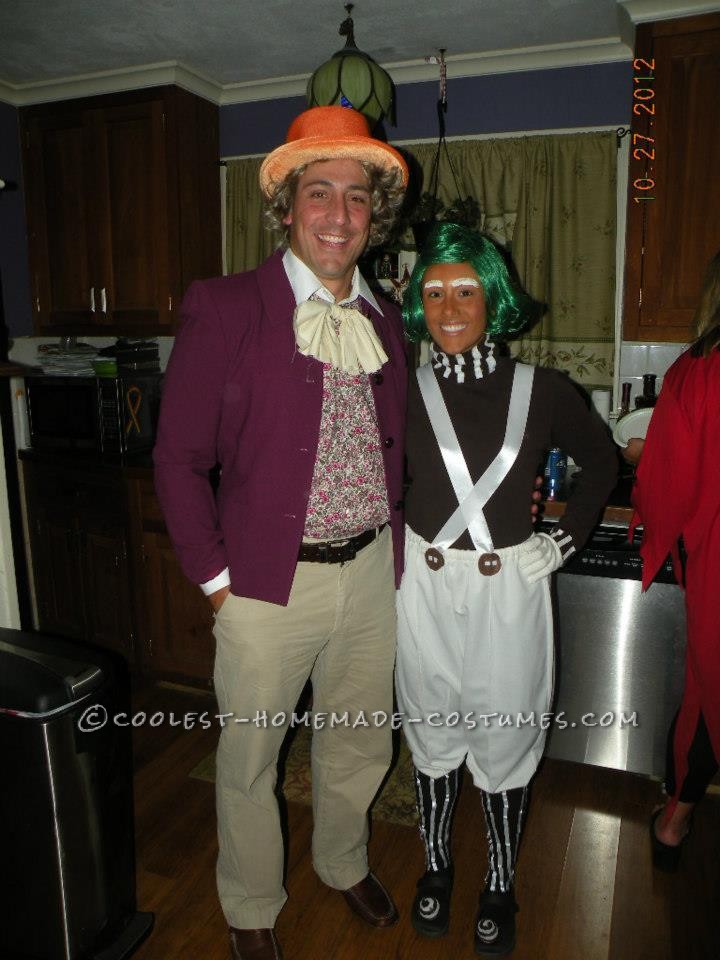 Our Willy Wonka and Oompa Loompa costumes have been the most fun, not only to wear but to make so far!  I Googled some pictures of Oompa Loompa’s as well as the ORIGINAL Willy Wonka and based my design off of that.  The Willy costume was the fastest to assemble so I will start with that:  I went to a local Ggoodwill store and picked up an extra-large purple blazer, a white, collared men’s shirt, an OUTRAGEOUSLY floral woman’s shirt, and I was lucky enough to score the sweet wig and ridiculous orange, top hat!  Basically the only real tailoring I had to do was to cut the floral shirt so that only the front part was left  (I removed the arms and the back of the shirt).

I then hot glued it to the front of the white collared shirt (I was going for quick and easy).  I then made an over the top bow tie out of a piece of cream colored material that I bunched in the middle and wrapped another small piece of around.  I also purchased a wooden dowel, hot glued a small Styrofoam ball on top and spray-painted them both gold, for him to use as a cane.  Voila!! Willy is complete!!

Now OOMPA was not as quick but it was such a blast to make because of how over the top it was.  I purchased large white pants at the local Goodwill along with a brown turtle neck and purchased a green wig that I later pinned on top to give that “oompa doo”.   The rest was pretty simple, using some white felt I stitched lines on the neck and realized that was WAYYY too much work, so I opted to hot glue white ribbon on the arm cuffs as well as my brown socks (which were men’s so I could use them as knee highs).

For the pants I cut them slightly below knee length, and then attached large white ribbon as the suspenders to both sides.  I finished those puppies off with some brown felt buttons.  For the shoes I bought some cheap brown slippers and hot glued Styrofoam balls to them that I had pre-painted brown swirls on.  Threw on some white gloves and doused my face with the most orange, jersey shore foundation I could find, threw on some white face paint across my eyebrows, then stood in the mirror for about 5 minutes before I left the house and laughed hysterically.

We got compliments the entire night.. AMAZING.