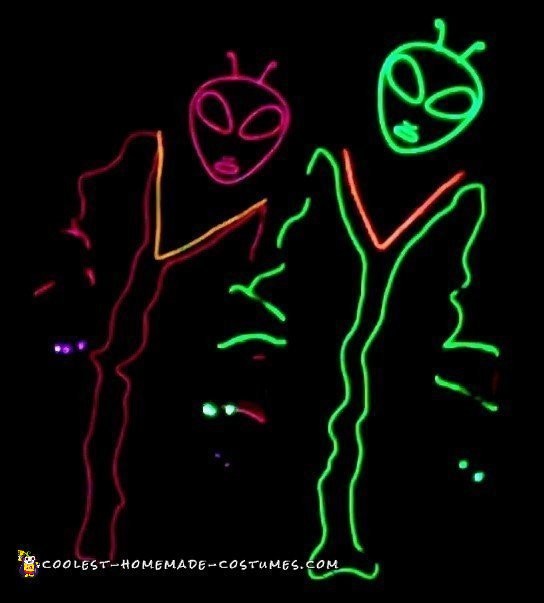 I wanted to make fantastic glow in the dark costumes after discovering EL (electroluminescent) wire. It’s cool to the touch and bends and shapes easily.  So I researched how to solder and connect it, then began my project.

I bought simple robes for my husband and myself and made them into the basis for the alien costume theme.  I used a ball of string to lay out the wire path, measured the length, and then ordered the EL wire (pink for me, green for my husband, a multi-colors for the blinking vest part of the costume).  I also ordered battery power packs for the wire to power it.

I sewed the EL wire to the robes, and where I had to backtrack the wire, I sewed it inside the robes so it would not be seen. At various points on the blinking vest portion, I had to solder one color to another.  This portion also required a separate power pack in order to have the various colors blink in succession.

I bought black foamboard at a craft store and made the masks out of that, cutting it to the alien head shape and cutting out eye holes so we could see to walk around town, then attaching the masks to the brim of black baseball caps.  Then I sewed the EL wire to the foamboard (I first had to punch small holes for the sewing needle to go through, using an awl), and using black matte duct tape to block out the parts of the wire that I did not want to shine.  So these glow in the dark costumes are pretty much dark-dependent.

I decided that I wanted a second face to be able to switch to it at will.  So I sewed another face onto the foamboard and bought a SPTD switch which I ran down my arm to a button at my fingertips.  If someone said something to me, I could press the button and switch to the second face which scared the daylights out of even the adults :)

All in all, these glow in the dark costumes were a complicated project, and it took me about 3 months to finish in my spare time.  But I knew it would be unique and awesome!

I also bought voice disguisers to make us sound like aliens.  My husband and I wrote down phrases we thought would go over well, like “We come in peace earthling,” “We require earth candy,” and “Would you like to take a ride on the mothership?”

I could not believe the response we got walking around in our glow in the dark costumes!  Kids and adults everywhere stopped in their tracks and were fascinated.  People viewing us from far away stopped and stared, speechless, some even scared.  Everyone wanted their picture with us, but you have to tell them that camera flash ruins the effect because then you see the foamboard and all the workings of the costume.  So they would leave the flash off for pictures.

We learned that we had to be very kind in words to young children for they truly thought we were aliens and they were pretty scared, with their parents constantly saying “remember, it’s only pretend.”  The adults on the other hand could not get enough of when we said our voice-altered alien phrases, especially the one about the mothership ride.  The best part of the night was when the policer officer on motorcycle patrol stopped his bike, stared at us, and shakily said “oh my gosh those look so real.  It’s extremely freaky.  Come over here to my bike and stand next to it so I can get a picture of this!”

We can re-use these glow in the dark costumes over and over again, and just replace the batteries every year.  It was a huge project but the results were amazing and well worth it.  I’m now thinking about what other costumes can I make with EL wire? 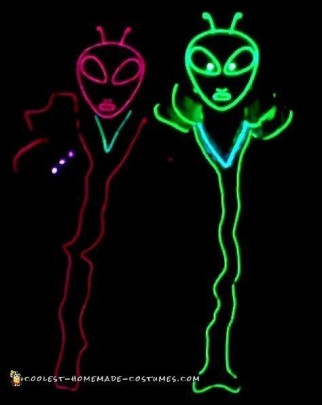 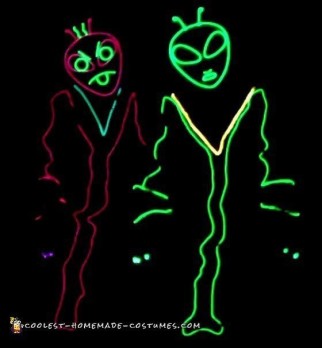 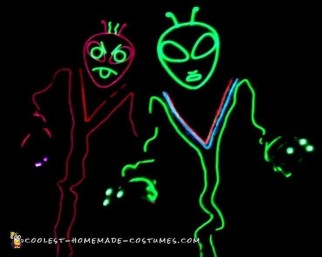 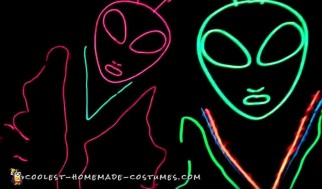