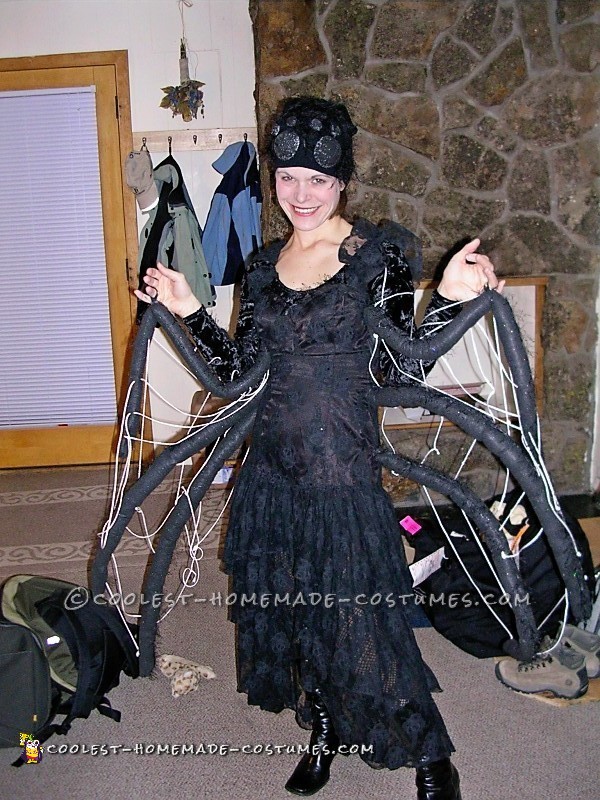 Part of my halloween play is the hunt, so after thrifting for awhile I found this plack lacy dress that I had to have. From there I decided it would make a perfect spider,  maybe it’s like batman calling out your fear, I don’t know.  I went and bought yards of black sparkly felt and white shimmering cord for the web.  I didn’t have a sewing machine at the time so it was hours of sitting on the couch hand sewing and stuffiing each leg, a few a night. Good stress reliever. Finally, all 8 legs were done so I decided to add a web that would go between the legs and a finger hook so the legs could move with my motion. Then after looking at more pictures I decide for this to work I woul need an abdomen so I sewed a big oval out of the same black fabric, stuffed it and finally added the final touch of red satin funnel on it’s back. That abdomen has seen a great many sights, more than  many people, it became a great camp pillow!  I struggled with the eyes for awhile but decided on a cheap blacks stocking cap and then glued black glittery pom poms on for the eyes. I had to fight the cat for these, everynight when i’d go to work on the project i;d find pom poms all over the house, our  cat, Puppy, would get into my bag and pull them out.

It turned out to be a great costume for both school and play! I am a teacher and wore it all day at school, halloween also happened to coincide we me getting a new student from Africa! His eyes went big and round, the poor kid didn’t  know what to think, his teacher was nuts!

Coolest Spider Costume for a Girl