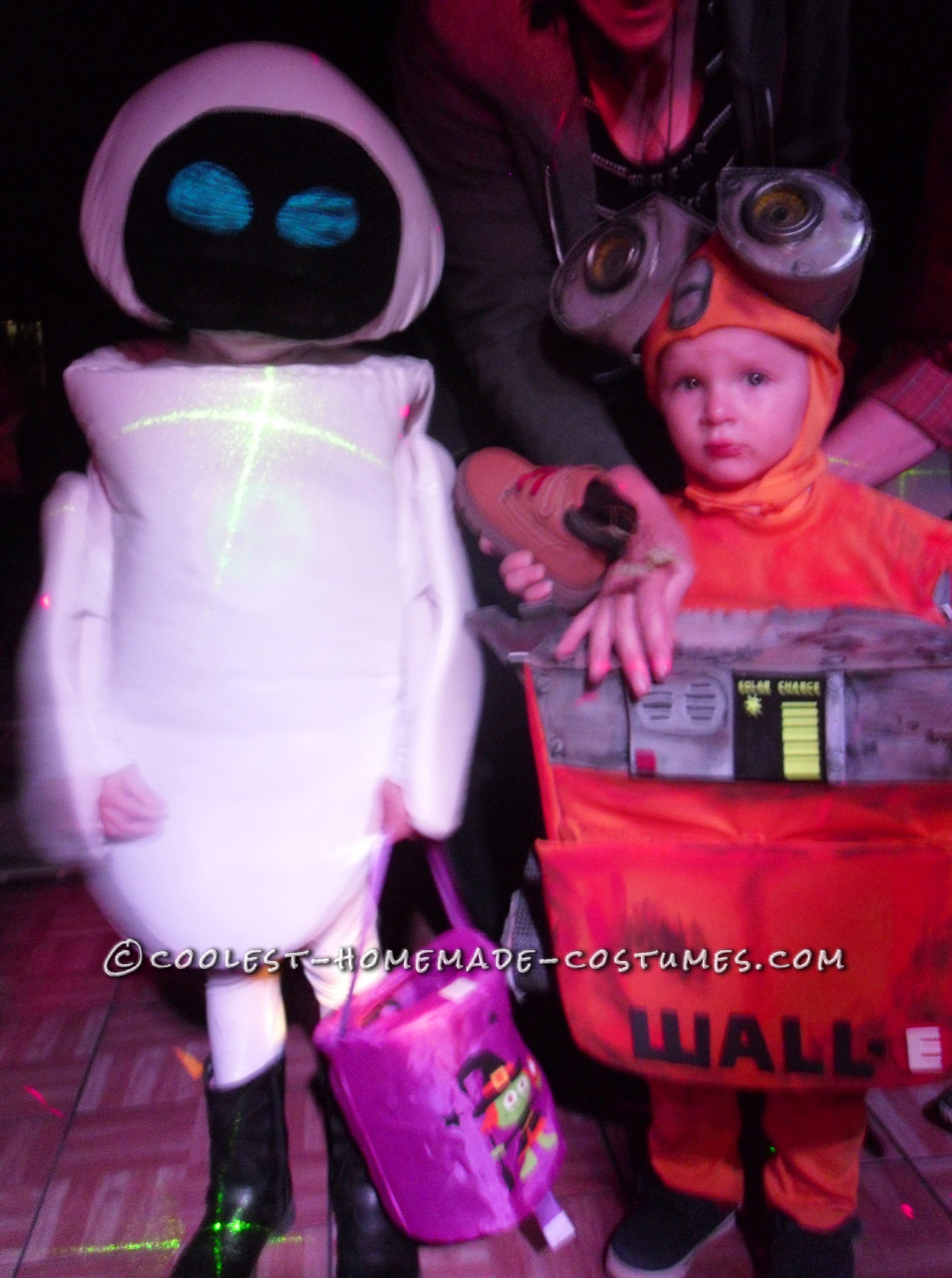 Every year we creative loonies have the challenge of coming up with original and fun Halloween costumes.  Once we have children, that tradition gets passed down to them (whether they fully appreciate it or not.)  Thankfully, I have a 4 year old daughter who genuinely seems to love crazy costumes, and definitely loves being unique.  But my son, age 2, was protesting loudly this year to anything relating to costumes.

Another challenge arose when someone suggested to my daughter that she be Elsa this year.  I had already made her an Elsa costume that she loves, and she seemed quite happy about the idea.  Perhaps I should have just “Let It Go.”  I could have whipped up a cute Olaf costume for my son and called it a day.  But no; I’m much too masochistic for that.  In the “year of the Elsas,” I couldn’t have my daughter blending in with every other little girl in the world.  I knew I had to come up with something that would excite her more than the idea of the ice queen!

One day, while watching the fabulous movie ‘Wall-E’, I came up with a brilliant plan.  I said to my daughter, “Wouldn’t it be fun if your brother dressed as Wall-E this year for Halloween?”

I was so relieved that she’d come to this conclusion, that I didn’t think of the ramifications at first.  And then it hit me.  How in the world was I going to make an E.V.E costume???  And how was I going to get a 2 year old who hated costumes to wear a big, bulky Wall-E costume???  Why do I do this to myself!!??!?!

So I got to work.  I knew that if I was going to get my son to wear a costume at all, I had to make it comfortable, fun, and appeal to a 2-year-olds interests.  So what do 2-year-olds like?  Pushing buttons, and things that open and close.  Both of these were things I could definitely incorporate into a Wall-E costume.  I ordered a tape recorder (which are really hard to find) and loaded a tape with the 2 songs from ‘Hello Dolly’ that Wall-E listens to in the movie.  I decided to make the body of the costume out of ½ inch upholstery foam backed with plastic mesh sheets and covered in fabric.  This gave it a rigid shape, but enough flexibility that he wouldn’t feel as awkward in it as he might have with a box.  I added a door on the front that could easily open and close with magnets holding it together.  And of course, I had to give him a plant-in-a-boot that he could take in and out of his little cubby.  His eyes and other details were mostly made out of fun foam, and plastic mesh sheets for stability.  The final touch was my favorite part; painting it to look rusty and dirty.

Eve was a bigger challenge to conceptualize.  I built her head on bike-helmet base, using a cut up plastic bowl and covering it in paper Mache.  I then created the glowing eyes with a battery-powered, very thin rope-light and put a piece of black fun foam over it with the eye shapes cut out.  I covered the top of the head with quilt batting (to smooth it out) and stretchy white vinyl.  The underside of the head was made out of a white, see-through nylon mesh fabric.  The black face cover was made from the same see-through fabric.  She amazingly could see really well and never ran into anything!  The body was made out of plastic mesh sheets, covered in quilt batting and white vinyl.  The flashing plant symbol was another battery operated rope-light hidden under the vinyl.

The day before Halloween we had a good dress rehearsal at my daughter’s pre-school Costume Parade.  She wore her costume to school that day, and loved it (though I’m not sure her teachers loved her wearing it too much!)  When my son and I arrived, I still had no idea if he would wear his costume.  He liked playing with it, but every time I mentioned putting it on he would yell “NOOOOOOOOOOOO!”

I nervously got him out of his car-seat and told him, “This is it!  Time to put on your Wall-E costume!”  To my amazement, I was able to slip it right on him and put on his hood without a fight!  He immediately smiled a huge smile, pushed the play button on his tape recorder, and ran into the school yelling “Wall-E!  Wall-E!”  I was SOOOOOOOOO relieved!

The next evening, Halloween night, started with a few hiccups.  We had planned to go to a Halloween party that had a costume contest going on.  After my daughter choking at dinner, and my son slipping and badly biting his lip, our evening seemed doomed.  But once the tears subsided and the damage was assessed as minimal, we grabbed the costumes and headed out.  We got to the party JUST in time for my kids to walk up and win the “Most Creative Costume” award!  But by far the best part was watching them joyfully dance in their costumes.  All of the stress of the day and the past few weeks of sleepless, sewing-filled nights melted away.  Halloween 2014 was indeed a success! 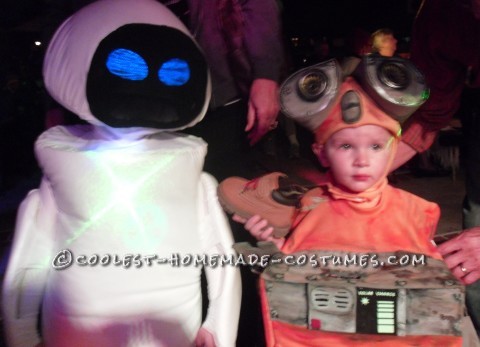 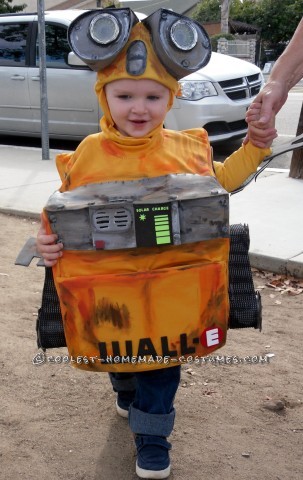 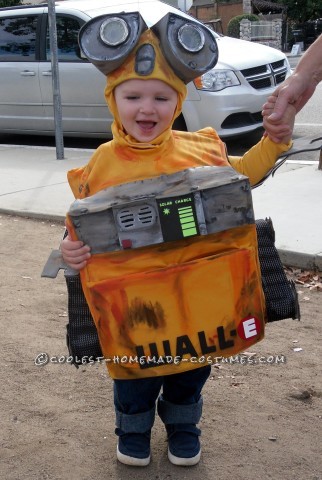 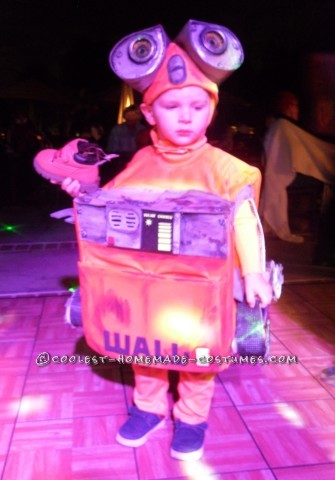 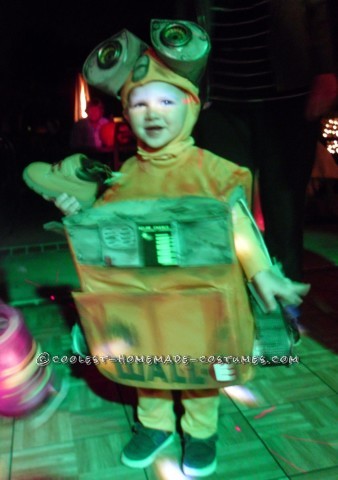 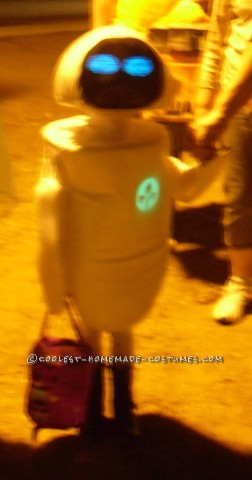 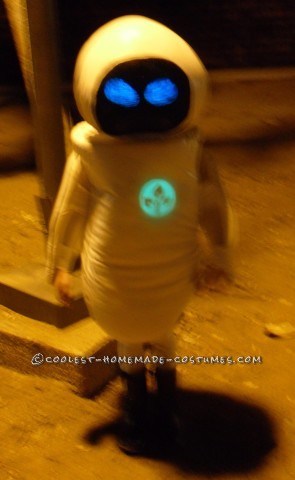 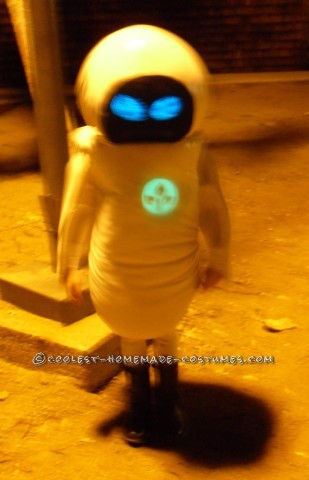 18 thoughts on “DIY Wall-E and E.V.E. Costumes for the Happiest Kids Ever!”