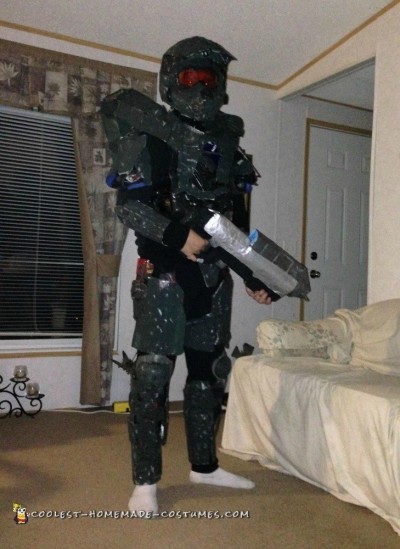 I didn’t want to spend 800+ dollars for a master chief costume and I didn’t have that kind of money because I’m 17 but I also didn’t want one that was cheap and didn’t look like the chief at all, so I made my own.

It took me about a month to complete it and I didn’t use just cardboard because I thought it would have taken so long so I looked at my dirt bike gear and decided to use my gear as the starting point and I just started cutting out pieces that fit onto the gear.

It was difficult because there’s no videos on YouTube of how to do it so I just “winged it.” The arms were the hardest part same with the helmet because I had to find a way to keep the arms on without taping it to my skin.

The helmet was hard because I was looking at a picture of the chief’s helmet and was cutting out stuff I thought would fit and there was a lot of try and error. I think I went though 12 cardboard boxes just on the chest. I wanted to put lights on it but I ran out of money for little flash lights to attach. I also made it so that the assault rifle clips on the back.

It was so satisfying when I finished because at first I kept thinking this isn’t like the master chief at all or it looks terrible but when I finished it looked good for what I could do because I’m not crafty at all I can’t even draw a stick person.

What I used to make it was 15 cardboard boxes but that was because I missed up a lot, I also used a dirt bike chest protecter, a dirt bike helmet, two shin pads and a water gun super soaker to be exact and I used pine green paint mixed with black and a little bit of brown and I went over it with silver paint to give it that scraped up look and I also used a orange tinted goggles.

I went thought three rolls of masking tape and a little bit of duct tape. What I did for the gun was I covered it in paper then I painted it.

I won the best costume out of my whole school and I won another contest in the community. 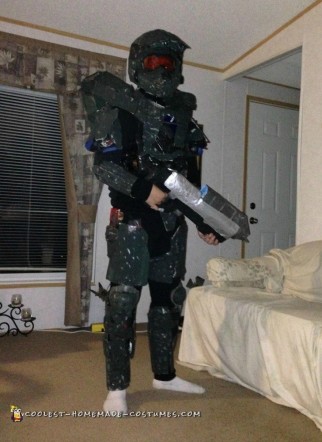