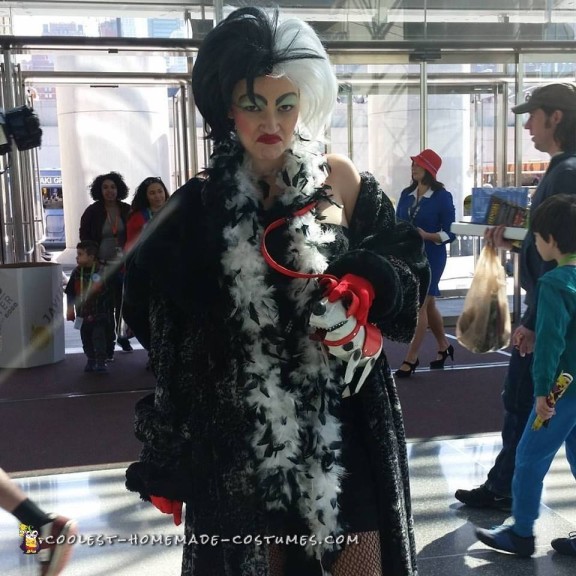 This Cruella de Vil costume was one that I actually made for New York Comic Con 2015. I am so proud of how it came out. I went as Cruella De Vil from the movie, 101 Dalmatians. I had such a blast being Cruella for the day!

I am lucky enough to have a mother who has the most ridiculous closet that I did not need to buy most of the costume.  She had the coat and the purse. Those pieces are not necessary to the look so if you can’t find either for cheap, do not fear! The dress I purchased at a second hand store for $15.00. I bought the gloves from Amazon for $8.99. My mother had the wig already but bought that from Amazon a couple of years ago. The feathers that I wore I bought from a crafts store.

The makeup was the key to the whole look I discovered. I learned in order to make your eyebrows like Cruella’s, you must make them higher on your forehead. My regular eyebrows disappeared after putting a few layers of non-toxic glue on them (the clear glue sticks from the craft aisle). Once they dried I put foundation on my entire face. I put it on in layers so the foundation had time to dry. I added a dusting powder to seal the base makeup. Once my face was covered, I drew on my eyebrows with an eyeliner pencil, then filled them in to look darker. The makeup was fairly easy after that. I smothered green eyeshadow on and put on heavy harsh blush.  I overdrew my lips just a bit on top.

Walking around was incredible because so many children wanted to meet Cruella. It meant the world to me that people said it was one of the best Cruella’s they saw.  I felt very accomplished because it was not a store bought costume. There were store bought pieces, but I put the final product together. I felt like my hard work paid off.

P.S. If you want to do this look, remember to practice a good scowl!