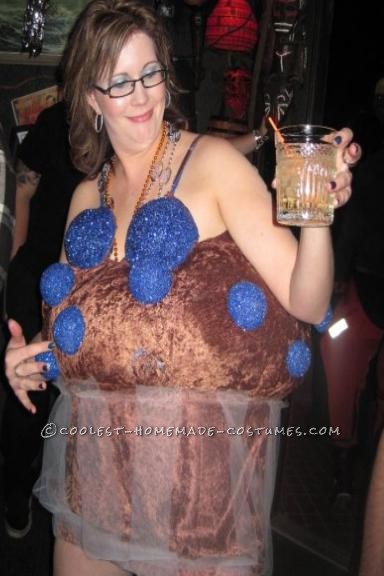 My sister is always asking me to make her costumes. Sometimes we have some good stuff. One night in September I received a phone call from her asking if I could make her a Muffin Top for Halloween. I started laughing, said of course, and asked how she came up with this. Turns out while having dinner with my Uncle, they were costume brainstorming, and as a joke he mentioned she should be a muffin top cause she is always complaining about hers. This was to funny to me. She sent me pics of ideas they found. I of course was already forming a plan. So I decided on a blueberry muffin because I decided that two strategically placed blueberries could draw attention.

This is how I made it: I bought fuzzy brown material, a small round laundry basket, white tulle, foam balls and blue glitter. I cut the bottom of the laundry basket off, covered it in the brown material, hand sewing at the top and bottom of the basket to keep the material attached to the basket. I then added a layer of tulle, folding it over every 5 or so inches to look like a muffin liner.

I then had her find an old tank top she didn’t care if I destroyed. I sewed the bottom of the tank top to the top of my muffin liner. I took the brown material and made a tire like shape, sewing it to the top of the tank top and top of the muffin liner. I then decided it was time to buy new pillows for the beds in the house. I took our old lumpy pillow and filled the muffin top, which made for a nice lumpy muffin. Now time to add the blueberries. I cut the foam balls in half, painted them blue and covered the wet paint in blue glitter. I then glued the blueberries all over the muffin. When the glue didn’t hold the blueberries in place I sewed them as well.

Then came my dilemma. How to make the two large blueberries? I had a bit of a blond moment, all I could think of was childrens playground balls. So I bought one, and of course it didn’t hold its shape once I cut it in half (later thought wish I had bought those cocoanut bras). I then told her to go find a couple bra’s she didn’t mind me destroying. I cut the bra cups and sewed them into half the ball which I then painted and covered in glitter. I then sewed the blueberries to the top of the muffin, strategically. The tank top straps helped to keep the costume in place. To had convention to the costume, I added two pockets at the top of the muffin to keep cell phone and money in (cause its hard to find the right purse when your rockin a muffin). Everyone was loving it.

On party night she made plans to get into as many contests as she could. I sat at home and waited for her to send me the results, of course she was having to much fun to send me much info. When she got home, she said she could not get her seatbelt on, and it was hard to shift her (manual) car, that the thing weighted a ton, and her arms were all scratched up from the glittered blueberries. She said she had a great time and won three contest. I looked up at her and said where’s my half. She said gone, I drank it. So she rocked that muffin! 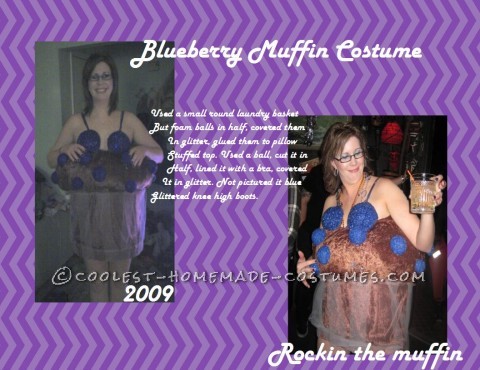 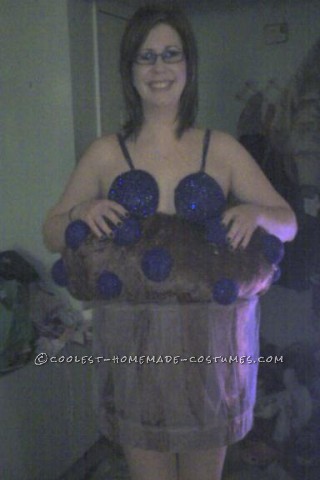