Our little baby was born early 2014, and I KNEW I would want a family costume this year!  I had seen stroller costumes online, and I decided with her being so little still, that I would incorporate our stroller.

Step 1 – Stroller cage:  You gotta contain that lion!  My father-in-law used to be a shop teacher.  After taking some measurements, and looking at my stroller, he made a cage out of wood that could be take a part for the car.  There were posts that slid into one another on the corners.  I added cardboard trimmings and painted them red.  I added a gold glitter stripe, and the word “circus” which was printed from online, and coloured it yellow.  I drew the “Beware the Lion” sign by looking at circus fonts online.  I used a hot glue gun to attach everything.  The roof was done in red felt and held down by velcro.  I was easy to take a part for travel.  (Tip: have a sharp exacto knife… It wasn’t fun hacking cardboard with a dull blade!).  I used glow sticks to make a hoop, and used leftover felt and yellow bristol board to create the fire – now baby lion had a fire hoop to jump through!

Step 2 – Costumes:  I found the baby lion at a local costume shop.  I borrowed a cape for my husband.  His glitter top hat was actually a Canada’s Day hat from the Dollar store.  His moustach was from Value Village.  He dressed in black underneath.  My costume was from Value Village.  I got the skirt, pirate vest (haha), mini top hat and whip from there.  I had my own black boots, red pants, and black tube top, and fun hair extenstion.

Step 3 – Makeup:  I looked at a few looks online, and conbined what I saw.  I gave myself a glittered look with gold glitter eye shadow, HUGE false lashes, and circus (somewhat clown inspired) markings.  I glued on jewels over my eyebrows, and added them to other details.

Step 4 –  Impress:  All eyes were on us as we did a local halloween parade.  We also went to the mall’s safe trick or treat and were stopped for pictures as if we were one of the attractions!  Finally, we got soaked trick or treating, but managed to win a toonie in the local contest at the firehall… there weren’t any other entries for the age group of under 1… haha. 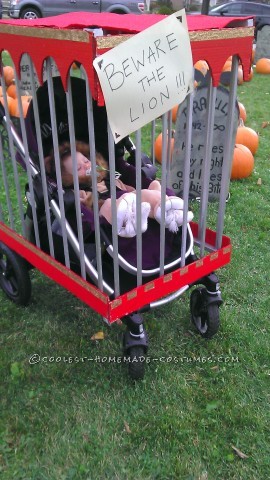 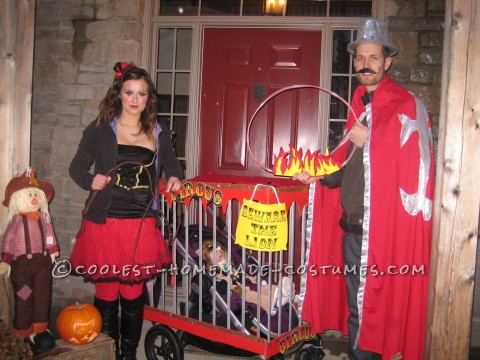 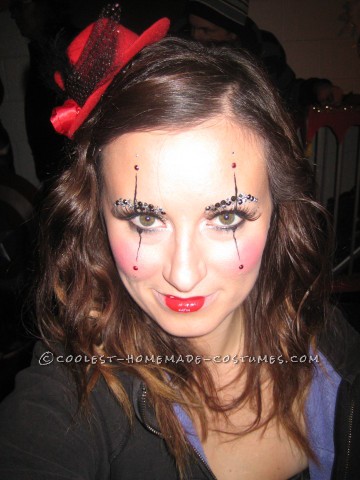 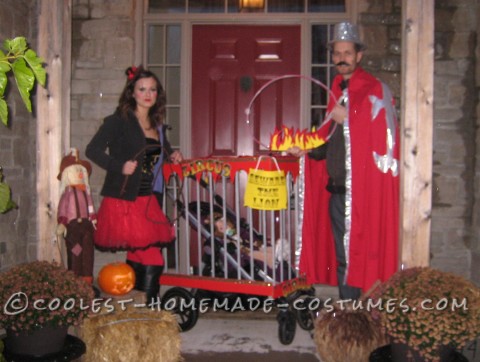