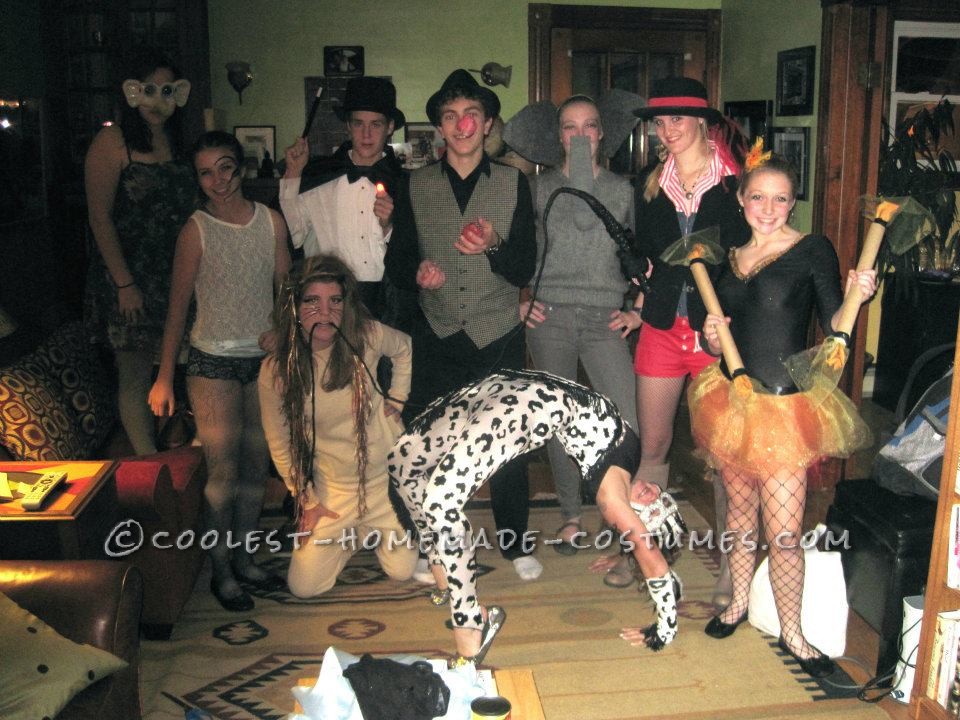 This Circus costume is great for teenagers looking for a group costume! It is incredibly simple, and there are enough circus performers for a huge group. Our circus was made up of a Lion, a lion tamer, a contortionist, two elephants, a juggler, a magician, and a trapeze flyer. Mind you there are also several other options for your circus, such as monkeys, tight rope walkers, muscle men, unicycle riders, clowns, musicians etc.

The costumes were incredibly easy to make. My friends and I simply went to several thrift stores and second time around stores and through together some costumes. Our elephants simply wore any gray clothing they could find, one used an elephant trunk and ears from a board game and the other made them out of a sock and some cardboard! Our juggler wore a hat and a plaid vest, and added a stripe to either side of his black pants, then walked around with three balls in his hands!

Our magician put together a tux with my father’s old cloths and wore a black cape made out of a sheet. He wore an old top hat and carried around a wand and a cool “magic thumb” that he won at a school event. Our lion’s tamer got most of her costume from thrift stores, mixing and matching various articles of clothing. She wore a corset, a jacket, high wasted shorts, and a black hat with a red ribbon glued around it. We also happened to find a whip in the basement of one of our homes; she carried this around to “tame” the lion. Our lion was stunning, yet simple; she teased her crazy hair as a mane and added a headband with brown, sparkly yarn. She wore all brown, and tied a tail to her butt, her makeup made the costume.

Our flame thrower simply used her mother’s old leotard, and added some orange sparkles around the edges. She made a tutu out of an old belt and some various red, orange and yellow cloths. We made a flame stick out of a paper towel role and some orange, red, and yellow cloth sticking out the ends! I was the contortionist. My costume was a lucky find, we found it stuffed in the back of an old thrift store, we added some sparkles and made a mask out of some feathers and that was it!

Really easy to do, really fun to make, just throw some costumes together with whatever you have, like I said a circus is great for a large group!