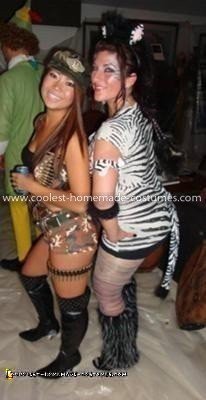 My idea to be a Zebra stemmed from loving animal print clothing. However, when I scanned the available costumes online I was very disappointed in the selection that was to be had. The only thing that would identify me as a “Zebra” would be the fact that I was wearing Zebra print. Which in my opinion was LAME.

So, I scoured the malls and boutique stores and managed to find a t-shirt that was a realistic zebra print (it actually looked like the animal, not a stylized version). I also found furry black and white go-go leg warmers and sheer zebra print panty hose. That is all that makes up the “store-bought” part of my costume.

I then bought some zebra print fabric, some black horse hair fabric, and several sheets of felt in black and pink (for the ears)from the fabric store. I made the ears cutting out fabric and hot glueing one layer of zebra fabric for the outside of the ears, wrapped it around the black felt and then did a layer of pink felt for the inside of the ears.

I then hot glued each ear to a plain black head band. I also made myself a mane out of the horse hair fabric. I sewed a 3 inch wide by 1 1/2′ piece of fabric and also glued that to the headband. I attached clips to the mane as well so that I could make sure it would stand up straight on my head. With what was left of the fabric I sewed a tail and put a small amount of the horse hair fabric on the end.

All in all, I think this Homemade Zebra Costume turned out pretty awesome!! 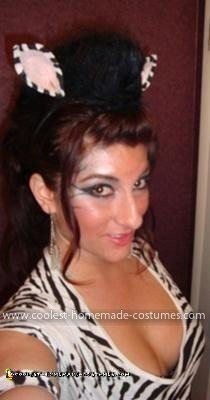 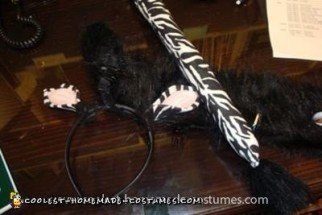 Lina the Awesome Horse as Buckbeak the Hippogriff