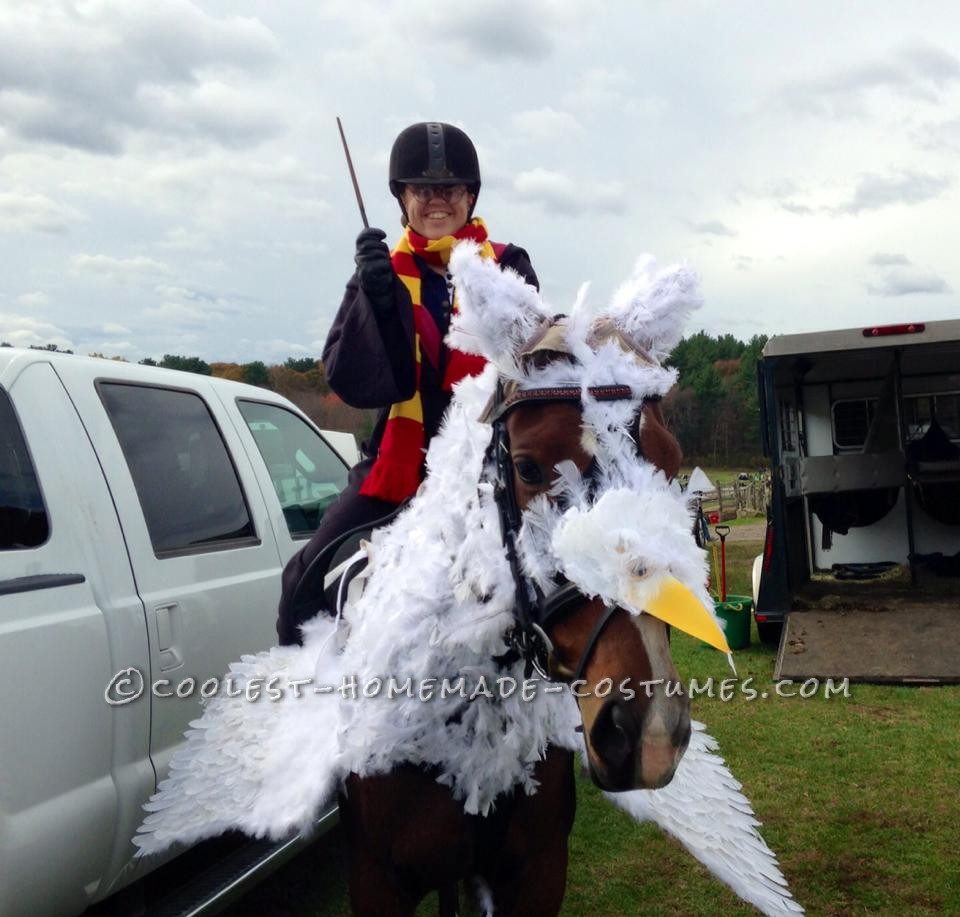 I’ll be the first to admit I’m a Harry Potter nerd. I grew up with the books and I’ve read all seven of them about 10000000 times at this point. So when I entered my awesome horse, Lina, in a Halloween horse show I immediately starting thinking about Harry Potter themed costumes. Once I settled on the Harry Potter theme, Buckbeak the hippogriff and Harry seemed like an obvious choice; a hipporgiff is half horse, half bird, so I figured Lina already half of the costume taken care of!

My Harry Potter costume was fairly boring–I bought myself some cheap glasses and a Gryffindor robe and called it a day.

Lina’s costume was more complicated. I took an old horse sleazy, bought all the white feathers I could find at my local Michaels, and started gluing. I used an “Eagle Mask” for the beak and wings from a fairy costume. I glued the beak to the sleazy along with all the feathers and tied the wings to Lina’s saddle. When I tried the costume on Lina for the first time (with only two days to go before the show!) I realized that I had totally forgotten about her ears. The costume looked great, but her brown ears poking out of the sleazy sort of ruined the effect. So I brought home one of her old fly masks, cut the ears off, and quickly glued some feathers onto that. We were ready for action!

Lina and I are eventers, meaning that our competitions have three phases: dressage, stadium jumping, and cross country jumping. I created this costume for a Halloween event at which competitors were encouraged to dress up for the dressage phase of the event. Watching the reactions of others (both human and equine!) made me incredibly proud of my horse’s patience and  tolerance.

For me, this costume cemented something that I already knew: I have an amazing horse. Not only did she allow me to cover her in feathers and ride her around, she actually performed incredibly well. Lina wore her costume with pride and achieved an excellent dressage score even with wings flapping around by her sides. Not only did we win the show’s costume contest, we also placed third in our division!

Lina did a fantastic job as Buckbeak the dressage Hipporgiff and then went on to have beautiful stadium and cross country rounds (although those were without feathers!). I am beyond lucky to have a horse who is both athletic AND tolerant!

Just about everyone who saw Lina commented on what a good girl she was and asked me how I made the costume. The other horses were less impressed. Apparently they had never seen a Hippogriff before and many of them found the costume absolutely terrifying. One horse lost his head so badly at the sight of us that his poor rider fell off! Oops. Luckily she was unhurt and she was a great sport about the whole thing; she responded to my repeated apologies by telling me not to worry and that she loved the costume.

The dressage judge summed up everyone’s reaction nicely when she called me over after my dressage test and said, “What a horse! Keep her forever!” That’s the plan. :) 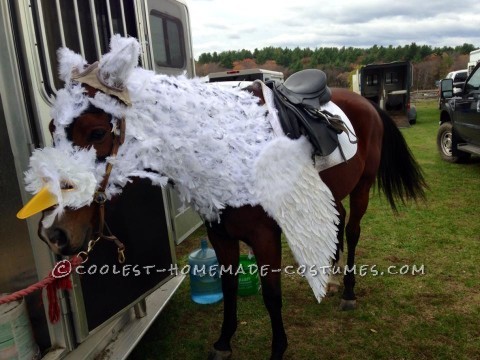 Horse and Rider Costume: Biker Girl on a Harley Horse