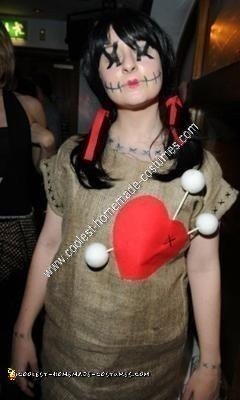 I love fancy dress and use any opportunity possible to dress up and get create. I never buy my costumes, I like to be original and make my own creations; whether its re-using old clothes or things found in charity shops, or creating them from scratch and buying in all the raw materials. For Halloween 2010 I decided to make my own Voodoo Doll costume from scratch.

For the dress I bought a length of Hessian material and made it into a simple sack dress. I rolled up the sleeves and stitched crosses using thick black thread around the edges of the dress. I did also make a belt out of hessian to tie around the middle to give the dress a better fit but in the end decided on the potato sack look! To the dress I added a big heart made out of red felt. Most of the costume was really simple to make the only bit I struggled with was trying to think of how to make the pins. When I first imagined my costume I wanted the pins to be sticking out in front of me but this proved more difficult than planned and would of actually been a bad idea, as they wouldn’t of lasted 5 minutes! So instead I had them sticking out of the heart but flat against the dress. I made them out of knitting needles and polystyrene balls and stitched them to the back of the heart re-enforcing them with strong tape. (They lasted all night!). Other little details adding to the outfit were tights with crosses all the way up the backs of my legs and black ankle boots with thick elastic crosses down the front of them.

I wore a black wig with my outfit (I’m a blonde usually) and put it into bunches with red ribbon tied in it. I think the makeup for my outfit was just as important as the dress. I really wanted to go over the top with it. I used lots of pale foundation and painted thick black crosses over my eyes with good quality face paint, (I also practiced this a few times as it was quite tricky to get right and more often than not ended up looking like K’s lol!). I used black eyeliner to draw on my stitched up mouth and then bright red lipstick to create a pair of heart shaped lips. I loved having this makeup on because whenever I had to pose for a picture I could just close my eyes and look freaky. I also added crosses round my neck and wrists using black eyeliner and painted black crosses on my nails with black nail polish, its all about the details lol!

I got a lot of good comments about my costume and some of my friends didn’t even recognize me! This is probably my favorite costume that I’ve created so far but I’m already thinking up ideas for the next one so watch this space 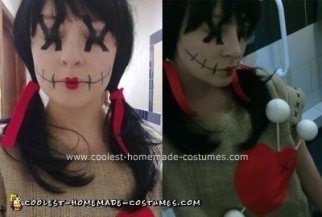 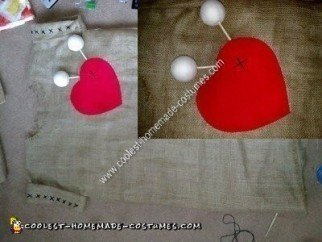 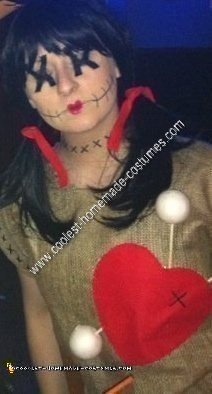