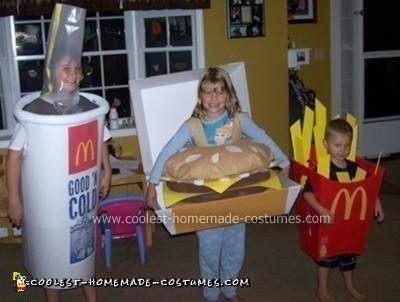 This year we wanted to have the kids do a themed costume together. After a lot of thinking we decided that they all love McDonalds so why not make them a Value Meal Costume. We started by making the french fry costume. We used 3 foam poster boards cut out in the shape of a french fry box and painted them red. Then we cut out and painted the fries yellow and hot glued them in place. Then we scanned a fry box and printed out decals and glued them on.

Next we made the soda. We started with 4 white poster boards. We cut them on a slight angle and glued and taped them together to form the cup. We went to home depot and bought pipe insulation to form the lip on the top of the cup and spray painted it white. We used brown fabric to simulate the coke a cola stapled it on the top of the cup. Then we hot glued to lip in place and covered the back seam with white tape.

For the ice cube I cut up a 2 liter bottle of soda and taped the together in the shape of and ice cube. Then I used clear shrink wrap taped it onto the frame and then heated it with a hair dryer. The straw is made from thick plastic and shaped into the straw shape we used red and yellow electrical tape to make the strips on each side. Same as the fries we cut and scanned a soda cup for the decals and glued them in place.

Now onto the burger the hardest of the three costumes. I started by finding the fabric for the bun I found it at Wal-Mart, it almost has a grain pattern on it. I cut and sewed and stuffed with poly-fil to form the bottom bun. Then we bought soft sheet foam from the craft store we cut and shaped the two pieces of foam in the burgers and painted them brown. We used yellow poster board for the cheese folding the corners down to look like melting cheese. We used extra scraps of foam to make the onions.

Then it was time to make the top bun. We cut styrofoam into wedge shapes and glued them to poster board. Then it was wrapped with the bun fabric and stuffed with poly-fil to shape the top bun and glued together. I bought a beige color fabric and cut into seed shapes and glued them on the top bun. Then I cut and sewed on shoulder straps to the bottom bun from the bun fabric. Now it was time to make the box. Same as the other costumes we used foam poster board to form the box. It was paint with orange paint just like the box from McDonalds and scanned and printed decals and glued them on. Finally we hot glued the bottom bun to the box.

We made the burger in two pieces so it is easier to put on. So we put the bottom bun and box on our daughter then we put the top bun and burgers on her to complete her costume.

We had to eat a lot of samples to get our ideas but it was defiantly fun and turned out to be very COOL costumes to make. I’M LOVING IT!! 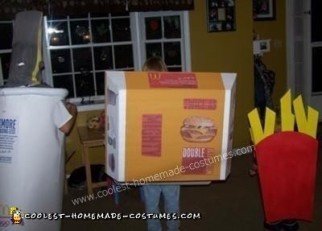 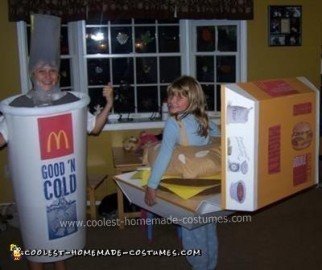 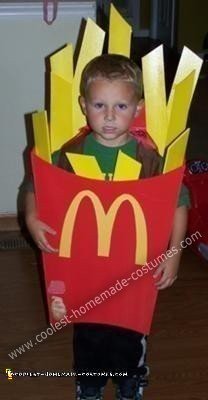