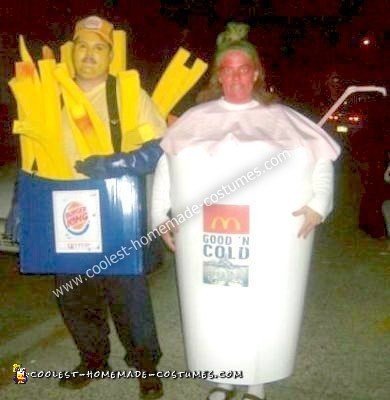 This year, we decided to have a little fun with some homemade costumes. I didn’t want to go with the traditional ‘dead dog’ or ‘zombie’ affect. Usually there are hundreds of thousands of ‘zombie’ or ‘undead’-based costumes and they all pretty well look the same, some a bit more professional than others. Then, as I looked at a “Fry Pod” from Burger King one day, I thought: why not go as a box of fries? Then my wife decided that she could be a Milk Shake and I jokingly said, “Well why not go as a McDonald’s shake and we can be the Romeo and Juliet of Fast Food!” Although it was a joke, the idea kind of stuck and we decided to make our Homemade Romeo and Juliet of Fast Food Couple Costume.

Although they were time-consuming,(the Fry Pod one especially), they were well worth it and got a lot of laughs and applause from the townsfolk during the parade and while we wore them around with the children. I don’t think they turned out too bad at all.

To make “Milk Shake”, we took a huge piece of poster board and wrapped it up to make it look like a cup, which is more tapered at the bottom than the top. It was then taped and stapled together so that it would hold; it was then cut so that it would fit over my wife without being too long or too short.

We then took two pieces of elastic and stapled them to the inside of the top to make shoulder straps for her to hold the cup up. We then measured and cut out arm holes. Then we took duct tape (white) and wrapped the whole thing in it.

The top part was made of pink cloth cut out to resemble an overflowing shake with a hole cut in the top for her head to stick through. Then the straw was made out of PVC pipe covered with white duct tape and then the McDonalds Stripes were colored in with markers. The rest was just a white shirt, white stockings, white shoes and some temporary colored hair spray you can pick up almost anywhere at Halloween time.

The face was red face paint with seeds made with an eyeliner pencil. The labels were all scanned from or found on the Web and printed out on the computer after being resized by Microsoft Publisher 2007.

Now the “Fry Pod” was a little more complicated but basically the same concept. It was made out of a big cardboard box to resemble a Fry Pod. My waist was measured and a hole cut out of the bottom so I could fit comfortably in; however part of the box flaps were left on the bottom to hold the fries in, once they were shoved in.

After the box and hole were cut, the box was covered in blue duct tape to resemble one of Burger King’s Fry pods since we couldn’t find gold color and paint wasn’t working as well as we had expected. After that was done, white poster board was cut to the shape of the inside of the fry pod and then taped inside to resemble the white lining of the fry pod.

I then had to cut the half circles out of the sides in order to create the “Crisp-O-Matic” opening. I judged on placement and size of those as best I could. Once these were cut out, all I had to do was add the labels and a few cosmetics. All the labels were made as closely as possible on Microsoft Office Publisher 2007 and printed out on picture paper. They were then glued to the “Fry pod” using craft glue. It didn’t dry right away and seemed to soak through the paper so we went ahead and put clear packing tape over all the logos. It seemed to work out well because anywhere the craft glue came through resembled the grease spots often found on such items.

It was then just a matter of acquiring a piece of foam, much like the foam used in the foam mattresses for camping. Once I got that, I cut it into pieces with a utility knife and then painted it yellow using yellow spray paint. Some of them were spritzed with red to give them the ketchup effect using temporary hair spray. The triangles on the side of the box along with the Crisp-O-Meter were poster board. The triangles were just covered with blue duct tape and then attached to give them more of a 3D effect.

After everything was done, we used a pair of suspenders to hold the box up and I wore blue sweatpants, a yellow T-shirt, a yellow hat with a printout BK logo, and then painted my face yellow with regular Halloween makeup.

These costumes did take some time to make, as does any homemade costume, and they also cost a little money but not as much as most manufactured costumes. The best part was the fun we had when making them and then seeing the look of disbelief on the faces of everyone we told that they were homemade and we hadn’t purchased them. Honestly…where do you purchase a BK Fry pod or a Micky D’s Milkshake Costume? I haven’t seen them other than promotional items, but I am sure they may be out there. We were a big sensation and in the words of Romeo and Juliet of Fast Food………WE HAD IT OUR WAY AND WE WERE LOVIN IT!!!

All one needs to make these costumes is a good sense of creativity, poster board, cardboard, suspenders, makeup, hair spray, duct tape (multi-colors), clear packing tape, craft glue, a utility knife, some semi-matching clothes, some knowledge of computer programs (or being artistic with other materials) and a little bit of time. It was fun for the whole family and we definitely look forward to making our costumes again next year.