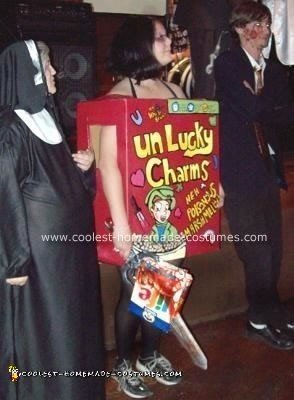 I spent months thinking of what to dress up as for Halloween last year and not until the the day before did I figure out what I was going to do. Finally I typed in ‘Creative Halloween Costumes’ in Google, closed my eyes, scrolled down and up the page and clicked. It took me to a Cereal Killer costume. It was a person with tiny cereal boxes attached to them.

SO I decided to take this UnLucky Charms the Cereal Killer Halloween Costume to the next level. I got a box and cut out head and arm holes and spray painted red the night before Halloween then the next day while at work in my spare time I painted the box. I worked on it until about 4pm and then wore it out that night. I went to Wal-mart after work with a friend to get a fake sword, some blood, and small cereal box. Before we even made it to the cereal isle my friend spotted a ‘Life’ box sitting by itself and we just knew it was the perfect choice to attach to the sword.

My fiance played a rock show that night at The Hard Rock Cafe and I won $200 in the costume contest!

While I was painting my costume at work one of my bosses suggested that I write a list of cereal’s that I had planned to kill on the back of the box. I don’t have any pictures of the back but that’s what was on the back.