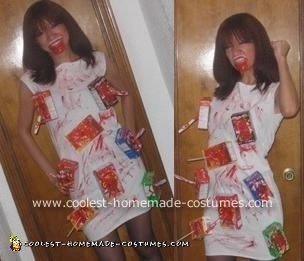 Last year I decided to make my own costume instead of buy one. I came up with the idea of dressing up as a Cereal Killer by searching different creative costume ideas online. The Cereal Killer costume idea came up a few times online, however, not exactly the way I made it. I had so much fun making and wearing the outfit, and other people seemed to enjoy it too.

Second, I stuck and glued the white plastic knifes through the mini cereal boxes and smeared fake blood all over both items.

Third, I glued on the mini cereal boxes with knifes intact on the white dress, and smeared blood sporadically on the dress.

Finally, I painted on a milk mustache using the white make-up paint, and smeared fake gel blood on my lips and chin. Voila! Cereal Killer (D.I.Y.) was created.

Tip 1: Make sure you use hot glue to glue on the cereal boxes to clothing item, and if the knifes don’t stay put, just add some clear tape around them.

Tip 2: If you want to be a Sexy Cereal Killer, just add black or red stockings and wear some black, red, or white stilettos.

Tip 3: If you’re going to join a costume contest somewhere, you might want to carry around a plastic milk carton with red glitter or paint inside, to give your costume some more Ooomph. Also, you can try painting the phrase “Got Milk?” using fake blood or red paint on the back of your white clothing item.