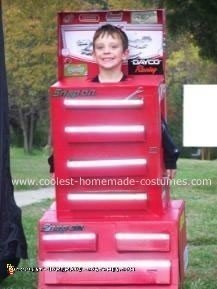 This tool box costume idea came to me because at the time I worked in a repair shop. I used two computer boxes as a start, but any durable box would do. They are attached using zip-ties. I cut out the holes for the drawers, arms, head, and the entire bottom for walking. I fashioned the drawers out of keyboard boxes.

Next, the whole thing was primed and painted. This took several days and coats. Now came the fun part. I spent a couple weeks searching out stickers, logos, decals, and anything else one would find on a mechanic’s treasure chest. I put the drawers in and loosely faceted them with zip-ties as well, so that they would pull out (to a point. Each had some type of tool in them. There were handles where you would normally find them on a tool box, only my son used them to help hold the costume when he walked. If he squatted down, the lid would close, and many people would think a box was sitting in front of them.

This is not our costume for this year, but when it was finished, he won two first place prizes in our town’s costume contests. It turned a lot of heads, and was a blast to make!

Cool Out of the Box Crayon Costume Idea

Best Ever Crayola Crayons and their Box Costume