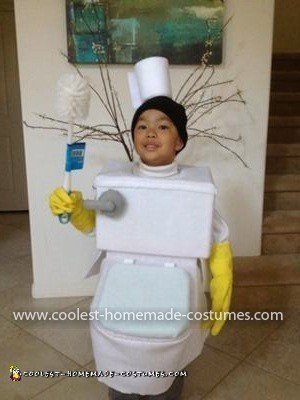 This year I decided to make my 4 year old son a toilet costume for Halloween! The inspiration came to me when one afternoon, my son was using the potty in our room and I jokingly asked him if he wanted to be a potty for Halloween. After much convincing he finally agreed!

So I began to look for toilet costumes online, but unfortunately there was only one style for sale it was only for older kids and adults. So from there I knew the only way to make him a toilet for Halloween was to make him a costume on my own. After some mental planning, I went to work.

I first used a box we had at home that was a good size. I took all my son’s measurements, and cut the box so that would end approximately 3-4 inches above his lap when he sat. I cut out the hole for the arms and head and torso. So that was my toilet tank.

Next I used the same cardboard box to cut out the toilet seat and toilet seat lid. My toilet seat was a rounded cornered rectangle shape. I bent the board in half so I could stick half of it into the back of the front piece of the “tank”. I wanted my son to be able to still sit down and look even more like a toilet so the toilet seat extended just a couple inches past his knee. I then cut a hole in the toilet seat for the toilet bowl, and it would also be where people could place the candy.

Then I began covering the tank, toilet seat, and toilet lid with white felt (make sure to wear gloves! Preferable latex). I gorilla glued the fabric to the card board. For the toilet bowl I gorilla glued some felt to make a can shape which I then glued to the toilet seat hole. Then I stuffed some light blue felt in the felt bowl to look like water. I covered the handle pieces in grey felt.

To make the seat stay at a 90 degree angle, I used floral wiring and taped it to the back of the seat board.

Then lastly I did the bottom of the bowl and tank by simply gluing more felt to the edges of the seat and the bottom of the tank. To determine the length for the seat, I just measured my son’s knees to feet and let 3 inches off. For the length of the back of the tank I didn’t want him to sit and accidentally pull on the fabric so I made it just long enough to touch the chair when he sat.

For the accessories I made a toilet paper hat. I just used the empty toilet paper cardboard and rolled the felt around until it was the size I wanted. I then just glued it to a simple black beanie.

So total cost for the no-sew toilet costume:

Gorilla Glue: $10.00 ($4.99 per bottle x2, the first bottle I completely wasted because I used too much. Probably one bottle is enough. You just need to glue the edges where I was gluing all the void spaces as well)

In the end, I taught him to say Trick or Treat and lift the lid at the same time. Everyone who saw him loved it and even the people giving out candy had great fun. 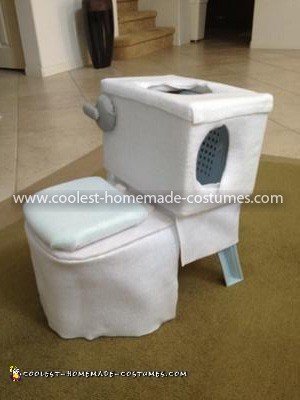 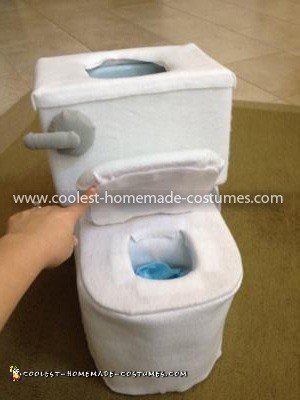 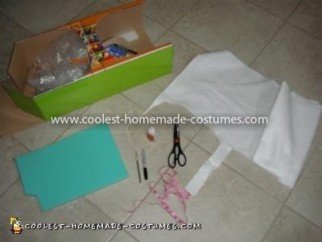