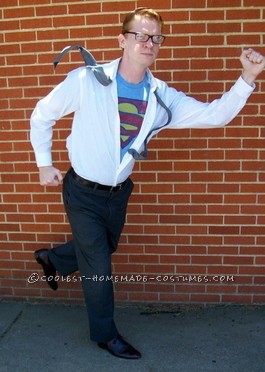 My husband loves superheroes! OK  OK … so do I.

So, for our first cosplay attempt at last year’s Comic Con, we decided on a super simple (and cheap!) Clark Kent in the middle of “becoming” Superman costume for him. (I was Tank Girl – you can check out my other submission for a how-to on my costume!)

White button down shirt (from your closet or thrifted)

dress pants and belt (from your closet or thrifted)

dress shoes (from your closet or thrifted)

Superman T shirt (I found his at WalMart, but you could find on online, or even make one if you don’t already own one)

nerdy-style glasses (Tom already has some, but you can find costume glasses online or at Halloween stores)

A dressy necktie you don’t mind losing to a good cause (from your closet or thrifted; be sure the tie has “openings” in the back, so that wire can slide down into the tie)

sturdy wire (I used a stainless steel, 12 gauge – I think – most any gauge will do)

needle and thread that matches your tie, plus rudimentary sewing skills

a friend with two hands (optional, but it helps to have an extra pair when putting on the tie)

How to make it:

The only thing you should have to alter is your necktie. So, pick up your wire and make a loop at the end with your needle nose plyers (just one loop – you want it to lay flat against the tie.) Measure the amount of wire you need to span the length of the tie. (hint: if your wire is a smaller gauge or made of a softer metal, like copper, measure the length of the tie times 2, so that instead of one long piece of straight wire, you’ll have one long piece of “U” shaped wire running down each side of the tie, rather than down the middle.) Create another loop at the opposite end of your piece of wire.

Now, sew the loop you made onto your tie by laying the loop flat against the fabric and stitching loops to attach the wire to the tie. Sew the wire to a hidden or inconspicuous place, preferably on the inside of the tie (sewn to the opposite side of the fabric that would normally lay against your chest if the tie were tied normally.) Do the same with the loop on the opposite end.

Put on your Superman shirt and Clark Kent dress shirt, pants, shoes, belt, glasses, and any other accessories (wrist watch or what have you, you fancy man,) and unbutton the white button down so that the Superman logo is visible. (Don’t worry if your shirt isn’t stiff enough to stay in place; once the tie is on, you’ll safety pin everything.)

Now comes the trickiest part of the whole costume (and it’s not that hard!) Bend the tie around your neck (on top of the white shirt,) as if you were going to put the tie on normally. Now, where the collar ends, use one safety pin on the right and one on the left to secure the tie to the white shirt. If you like, you can pin it down to your Superman shirt, too, so that the white shirt stays in place.

Now, get creative! Bend the tie until you think it looks as if it’s whipping in the wind, as Clark Kent runs faster than a speeding bullet to the phone booth to transform. Once it looks good to you, simply use a few more safety pins to secure it in place.

This costume is easy, cheap, and if you don’t have all the items, they’re very easy to find. It also makes a big impact without a ton of work!

Depending on the length of the tie, you could easily smack the faces of the people standing behind you in line. Some would argue that this should be under the “pros” section.

The guys were SO impressed with this costume! As we were wandering around the convention center (looking for the end of the line,) we saw a couple of other Clark Kent’s who smiled and nodded in solidarity. The tie is what made my husband stand out from the crowd, though, and he’s so sweet to give me the credit for coming up with the idea. Every time someone gave him a compliment, he’d say, “Thanks! My wife did all the work.” Then that someone would look at me and ask (in serious wonder, haha,) “How’d you get the tie to stay like that?!” I almost felt bad that the answer was as simple as “wire,” so I started saying “magic.” The only negative reactions to the costume were about my husband’s red hair! They were all good-natured, of course, but my favorite was, “What sorcery is this?! A red-haired Superman?” So, needless to say, if you have darker hair, your costume will be truly complete. 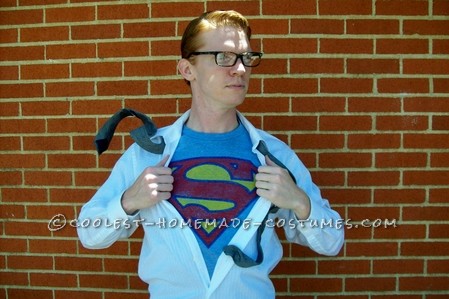 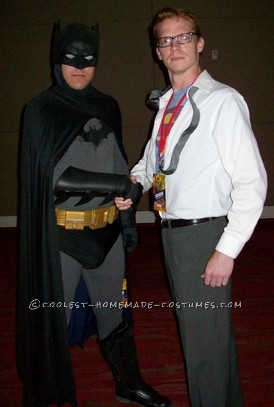 Man of Steel Superman Costume For a 5-Year-Old Boy